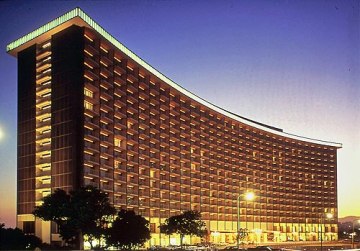 Christopher Hawthorne writes in the LA Times that the Los Angeles Conservancy is now battling to save architecture from the 1960s. They even have a new website devoted to the theme: The Sixties Turn 50 .

Historian John English (not to be confused with historic monument Jon English): “Early on, the idea of preserving modernist resources was hard for many people to swallow. In the 1990s, buildings of the fifties gained credibility, but people couldn’t even think about the sixties as a preservation issue. Now, here we are! This is it! There is no longer any doubt that enough time has passed for these structures to merit preservation.”

The LAC is trying to engineer an elevated status for the better Sixties buildings, now that they are becoming eligible for protection on the National Register of Historic Places (50 years is the trigger). Hawthorne commends the effort but raises an alert. The demolitions of important buildings from the era are being justified with green talk. Pull down a low efficiency concrete eyesore and pop up a six star people-friendly building ,clad in recycled wood, with lots of bike parks. Never mind the embodied energy. “Both sides have tried to argue that they have sustainability on their side.”