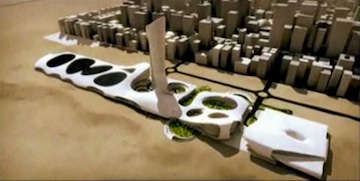 Here’s a link to an hour long documentary on SBS looking at Snøhetta’s work masterplanning Ras Al-Khaimah in the Dubai desert. They were in competition with OMA (Rem also appears on location in the desert picking his nose). I’m still watching it now, but a good early moment shows Snøhetta director Kjetil Thorsen pressing a three-sided ruler into a tray of sand, then removing it. Looking at the groove left behind he says, “this is the city”. The staff gathered around the table sit in startled silence with mouths hanging open.

There are some riveting moments as Snøhetta are matter of factly told that they had lost – immediately after their presentation – but not to worry as they could do the convention centre. The presentation of the convention centre is also a vicarious nerve wracker. “This is the only icon you can find?”, asks the client. “You can make something much more grandiose.” They then discover that there there are three other practices competing for the centre.. And then there is the fees discussion… “you have to understand we are a poor emirate.”

Any kiwis wondering where architect Peter French ended up can catch a glimpse or two of him looking rather happy in the Snøhetta office.

This video will not be around for long and is probably only viewable from within Australia.