Poor old Jonathan Glancey at the Guardian UK isn’t terribly happy about “Australia-owned” Westfield’s new megacentre at London’s White City. Comparing it to an ’80s airline terminal, he thinks it, “is just a tiny step towards our collective desire to undermine the life and culture of the traditional city”. Westfield, no doubt delighted by the opening day surge of consumers into its new palace, suggest that, “once you’re here, you’ll never want to leave…”

Which reminds me of the pioneering Victor Gruen and his ‘ transfer ‘, a measurement of the time it takes between leaving your car and becoming a glazey-eyed impulse buyer in a shopping centre. Gruen was an emigre architect of Austrian extraction who designed a mountain of mid-century shopping centres in the U.S., before deciding he didn’t like the format and returning to Europe. 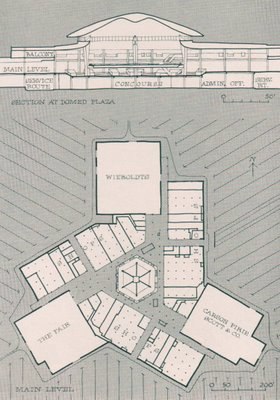 One of Gruen’s better efforts, the Randhurst (1962) in Illinois, does great things with triangles in order to accommodate three anchor tenants. It also had a nuclear fallout shelter – how’s that for safe shopping. The good bits were stuffed up and now everything is being demolished (except for the anchor tenants). The complex will be turned inside out and is being rebranded: over to the Mall Hall of Fame (!) blog: “[Randhurst] is to be demalled into a mixed-use, lifestyle-type venue. The basement/fallout shelter level will become an underground parking garage.”