Los Angeles’ photographer of the 20th Century, Julius Shulman, died on Wednesday aged 98. Taking photos since the 1930s (except for a break while post modernism passed by), Shulman almost single-handedly raised the profile of LA modern architecture to what it is today. He stumbled into architectural photography after some of his happy snaps of a Neutra house found there way into the architect’s hands. Since then his client list has been a who’s who of LA architecture.

In the Shelter interview (see below), Shulman talks through a small slideshow of photos. He didn’t think much of ‘naked’ architecture, and discusses how his best shots, the ones with people, came to be: usually a combination of happenstance and choreography. The famous Koenig Case Study House # 22 at dusk photo is briefly discussed, but the LA Times obituary delves deeper and discovers that Shulman took one 7 1/2 minute exposure of the darkening city with a brief flash at the end**. Shulman: “I said, ‘Girls, sit up now and look pleasant. Look toward each other as if you’re talking and hold still for just a second and the flash will go off.’ I pressed the release. All this time the shutter was open and the flash illuminated the interior.” 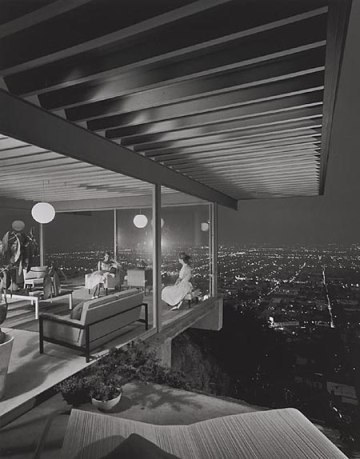 The LAT obituary reports that Shulman was defensive against attacks on his choreographed photos. He had a greater agenda – to sell modernism to the masses. “I sell architecture better and more directly and more vividly than the architect does.” And there he nabs it – the photograph is more than ever the vehicle for architecture, especially housing that is otherwise inaccessible.

Flattering photography can make a building much better than it is in person, as we see year after year at awards presentations. It can leave you speculating that photographers mustn’t get out of bed till 5pm. With the advent of “photos and plans only” awards like the WAF , perhaps we will see photographers becoming involved earlier in the design process, to guarantee the award-winning career-making money shot?

Can a commissioned architectural photograph become so good that it backfires? So good that you appreciate the lighting and composition of the photo rather than the design of the house? Despite the dusk photo launching his career skyward, Pierre Koenig wasn’t too happy that that it outshone the house. “It’s not just a photograph, it’s the house too.”

Last year a movie was released about Shulman, Visual Acoustics ( see the trailer here ) If you’re in Melbourne you can watch this film at the upcoming MIFF .

**The film says that the flash took place at the beginning of the exposure. Perhaps it doesn’t really matter.

Posted by Peter on 18.07.09 in photographers and photos