Adelaide Now reports on two developments in a spot of bother, both for being out of character. The first is a Jetsonesque building by DC Architecture in Kent Town, which despite being approved by State Heritage and the Council, and despite being made less space age and more stone age than the pic below shows, was recently knocked back by the local Development Assessment Panel for reasons including:

The council (which supported the proposal) also said that the DAP had, “fundamental concerns with the residential nature of the development.”

Pic of original proposal by DC: 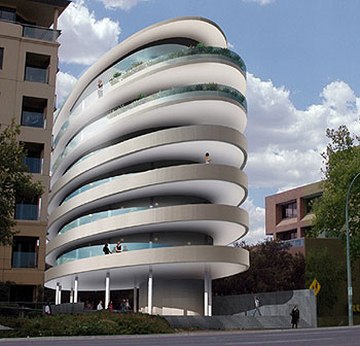 Meanwhile over on the Semaphore beach front, developers Nikolas Anargyros and Grafio Pty Ltd have to pay $39,000 plus legal costs of $56,000 for de-blinging their building, at variance to the design approved by Council.

This one has been in and out of the courts for the last three years since the duplex was built. The council had been wanting the front pulled off and changed to something more historic, with eaves gutters and gables, like they had approved. They won’t get that now, but will get some cash instead.

One might have hoped that the developers went for something a little less bland in their transgression – like Giuseppe Terragni did in Como in 1927, when he presented a traditional building to council for approval, then proceeded to construct Novocomum behind the scaffold screening.

A&D have spoken to DC architects about the project. DC are taking it to court, and say, “This is a massive problem for architecture in Adelaide. It’s difficult enough for architects to come up with good designs without having them be trampled over by council.” I thought it was the DAP that was the problem here?

The state branch of the ®AIA has protested the rejection of the second DC proposal, asying it isn’t in tune with the 30 year plan. State president Timothy Horton: “This shouldn’t be seen as a sacrifice we need to make but an opportunity we need to grasp.”
ADELAIDE NOW