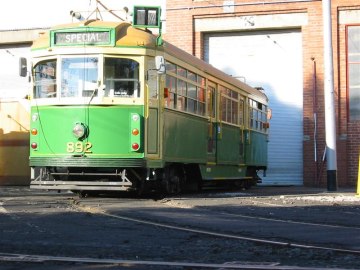 The National Trust (Vic.) has initiated a campaign to save 40 or so W Class trams that are to be mothballed soon, leaving just 12 to trundle the City Circle.

600 of the trams were built in Melbourne between 1923 and 1956. In 1990, there was a W Class Tram fleet of 300. Since then, a number have been sold off to overseas cities such as San Francisco, and many have been cannabalised for spare parts.

Princess Mary taking a tram to St Kilda, while in Denmark. 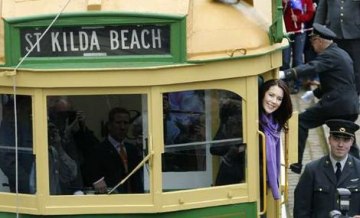 Very sad to see the W Class go. Such a shame that Denmark finds them iconic our current government doesn’t …

Corrected. Why did I never know that? sunt kelda = “sweet wellwater”, no saints in the suburb. Footy team will be pissed off.

The National Trust is considering getting hold of a W Class tram and upgrading it to be queiter and safer, “as a demonstration project”. But first they want to know if there is any support… ? Comment here or straight to the Nat Trust via their site.

Speaking of quiet, what’s the worry there. Those 10 year old white trams Kennett bought are MUCH squeaker than they used to be.

Great idea this!
As a young thing with a soft spot for old things i sincerely hope to see the W’s on Melbournes streets in the future.