The byline made me click: “Copper dome adds Europe to Gold Coast Real Estate”. LINK Life would be dull without the disneyland architecture of the Gold Coast, non?

Yes they’ve built a copper dome atop a confused nine-storey apartment block back from Surfers Paradise. In a tribute to euro puddings, the block has been named “Bella Vue”, which according to the developer means “beautiful view”… on the border crossing between Italy and France I guess.

Bella Vue is part of the French Quarter development at Emerald Lakes, along with the evocatively named “Le Parisien” and “Maison Apartments”. “Maison Apartments definitely captures the charm and character of a vibrant European village.” Here’s a vibrant pic. 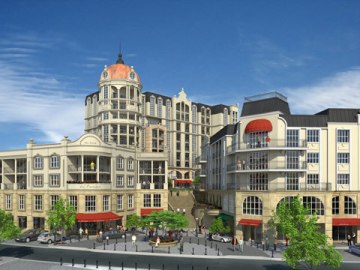 I actually quite like it. Sure, its pastiche but aesthetically its a far cry from the “balcony city” parts of Goldie. Hopefully it is executed well, many Postmodern developments look good in renders but tacky in real life – those that pull it off can be masterpieces in their own right. Anyway there is nothing wrong with “Disneyland architecure”. Most of Europe is doing it with their reconstructions. Out of context it is as eye opening if not more so.

But I would like to see is some more novel decoration embraced. I’m thinking something like the revolution from classical architecture to art deco and arts and crafts incorporating themes from contemporary society.

must….argue…with…sean….too many words all at once…brain can’t cope.. <passes out from disbelief>

so sean, you are saying that we should wholy copy buildings of the past, pass it off as being novel decoration, show no understanding for the context and apply stylistic tags ?
the developers wet dream…..
the GC started out as something very unique 50 years ago, only to be bastardised…
karl langer will be doing back flips in his grave….

bring back the 80s. get norman day to do the GC beachfront.
fcuk neo modernism. architects suck with their stoopid boxes.

boxes…huh….
you keep to sticking polystyrene mouldings on your buildings hd…..

just cut hair mate. leave the building for important mofos like black shirts.
miss all that big hair curly stuff myself.
i say bring em all back for one last barrel of laughs.
day. corrigan, metcalf. and the big bozo from brisbane who did that pub with the fatty boy columns. who hooo. if its a mistake it can all wash straight out to sea when the ice caps melt.

blackshirts bring tears to my eyes.

Old news southerners … french curves have been doing the Gold Coast since early 80s. Keep in mind the high cut g-bangers that the girls used to wear are now worn by the boys ….. go figure.

just proves if u stick at it for long enuff it comes back around.
wot will DCM do next. crack open the old plan drawers?

cabbie I disagree with historical copycat architecture. However I do think architects need to get the whole outdated “ornament is crime” and “less is more” discipline out of their heads and put the art back into architecture. Nothing is more gloomy than the simple revival of the 1950s and 60s international style which is currently dominating our cities. Its time for a change.

This is not a great example but references to historical styles are mostly out of frustration and lack of creativity executing styles with some visual complexity and interest. We’re starting to see some really good deconstructivism and expression emerging. They shouldn’t be discouraged. Ornament is an expression of time, fashion, culture and craft for present and future generations. Many of the most interesting 60s buildings are those that incorporated contemporary murals. New buildings for example could reflect the themes of some of the great new street art.

Sean, very interesting view you have. A little shallow.
kingnik, nailed it in his response.
what about making a building that reflects the physical, environmental, social and cultural contexts that creates it.
Look at where this thing is on the shores of a man made swamp, 15km from the heart of surfers palenstine.
If you want to see european architecture go to europe.
bloody black shirts.

bullshit sean – ornament IS crime. tatts are fcuken ugly. everyone who has one is a crim even if they haven’t done the crime yet.
look like shit – especially on chicks. piercings are gross.
u r a degenerate. loos was 100% right.

po mo was gay. been certified.

murals suck. usually bad art. all of em. give me tapestry any day.

i say bring in the german beer barn style. its better than tudor.

Call me shallow all you like, but to be honest if I was shallow I’d be living on the Gold Coast ! As far as shallow goes, nothing is moreso than hairdressers rant. What is to complain about anyway ? The Gold Coast IS a developer’s paradise – and not necessarily an architect paradise. They aim this sort of thing is for people who can’t afford to go to Europe or want to enjoy the sort of things (like climate) that Europe can’t offer. The developers know what people want, certainly not to be lectured by architects ! As far as social and cultural contexts go, I think it suits the GC – like Las Vegas pretence is its true essence. Anyways the style is not strictly “European” any more than soccer is played only in England. It has been successfully exported and adapted worldwide – as has modernism also originally from Europe. Australia is a true melting pot. And hairdresser, perhaps Loos should have noted that the peacock is a success of evolution too …. peculiar as it may be.

sean, your website illustrates the history of the developer and the blight it has left on the built environment. uninteresting terrace houses kept because a few people stamp their feet saying its important. there is no substance in your descriptions, which leads one to believe that it is nothing more than a high school project.
how do developers know what people want ?
sean, to even think that, let alone publish it on the web, you must be a stubbie short of a six pack…
the gold coast is nothing like las vegas….
a completely different context….
your view is merely an uneducated opinion.

“your view is merely an uneducated opinion.” Ease off cab driver.

I put the post up in the first place as I am full of wonder and awe at the glitzy tack they come up with on the Gold Coast. Don’t hate it at all, I’d even pay money to get in a little train and see it all, followed by some evening kino at jupiters bistro.

Seans holding back? too snobby. I want a pyramid with pharohs and next to that a mayan sacrifice temple with a 7 11 in the basement. Loos was right – tatts r degenerate and this country is not catering to its degenerate majority with uncompromised degenerate architecture.

Cabbie – its a little thing called market research. You don’t seriously think they waste hundreds of millions of dollars building something noone will buy or visit ?? Perhaps you could offer a suggestion of what you’d build there and a marketing plan to go with it ? The Gold Coast is nothing but a giant themepark so I don’t see how this development detracts from that in any way, although I’d hate to see it built in Melbourne. Hairdresser, Mayan architecture and the revival like the stuff of Frank Lloyd Wright is actually quite awesome. Why not build our own Gold Coast Luxor ? There are more than one Disneyland in the world afterall Gold Coast made a bid for one a few years ago. I’m going to go out on a limb here and say that without the Disneyland stuff and the canals the Gold Coast is really no different to any other coastal city in Australia ….

BTW Peter since when did your website become a commune for foaming bigots ?

^ so u r saying that neo main street is almost OK but should loose the humor and irony this time around & amp up the condescension in the discourse to give it fresh relevance in the 21C.

^^
“although I’d hate to see it built in melbourne”.—->i’m guessing here but you don’t do the St. Kilda Road haul then like Cabbie?

i’m still not sure i follow the
“it’s already bad, so it’s ok to keep on theme” argument.
Theres context, and then theres CONTEXT.

I know i’m making a massive value judgement on ‘good’ v ‘bad’ – but surely it should be judged on its merits, not excused because of its surroundings…

i’m saying drop the up the arse i’m from melbourne my taste & town is superior crap. dump is as tasteless as GC – so is the context.
do this from at least a level playing field. SEAN is way off track.

now that air is clear lets get into context.

re LOOS shit for all you lamebrains , hairdressers included but especially SEAN the cleanskin vic white render man – the old dead hang face sypho infested viena perv couldn’t wait to root Jo Baker but no way was he rubbing his face between her big banana ornamented tits was arguing for an architecture fit for society. ie two way equation ———or am i a numbskull. Don’t bring up ornament and crime unless u got a handle on it.
if u wannna talk that one get on the jap program – ie yakuza v white skin and clean. then we r talking the real modern world.

dunno mate there’s too much traffic out there….

When did I say that Melbourne was superior ? BTW these towers in Melbourne would be a lot better than most of what is at the Docklands with its Gold Coast like blandness. Melbourne has its fair share of Po Mo’s good and bad. Check out Botanica on St Kilda Road. 333 Collins on the other hand is very good with its abstract classicism.

probably when u said – “the GC is nothing but a giant theme park….., though i’d hate to see it melbourne”. bit mexican plumb in the mouth?
pot calling kettle black. that sort of thing.

i wondered wot 333 Collins Street was. abstract classicism is a top oxymoron the aussies could go with at Venice.

where is the good po mo. did someone build a venturi here that slipped under the radar in the 70s?

what phase of DCM do u reckon is the most timeless. when they were bazz graves, bill lissitsky or danny denton.

but u still haven’t answered my question. wheres the venturi – i wanna check it out. 1 i don’t know about 4 sure.