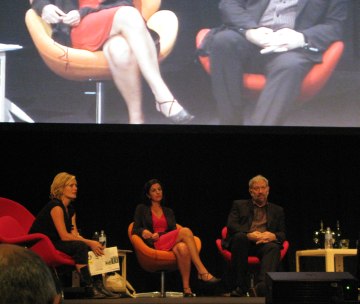 One of the more rivetting moments at the AIA 2010 conference, just finished, was the appearance of AIA NSW President Brian Zulaikha on stage during the last session about government architects. He had a short question for Assistant Government Architect Helen Lochhead – “why is the Government Architect’s Office in competition with the private sector”. Lochhead first responded that the GAO was “off-budget” and had to earn every cent of the $24M required every year to keep its 200-strong office open. When pressed further, she said, “I think that model myself is flawed”. She then reminded us of the things the GAO does that are (fairly) unique, namely The Indigenous Design Unit, an emergency engineers service, stone conservation, a water savings service, and electromedical engineering. A full list of the GAO’s services can be found here

Brian’s response to this? “We can’t afford with our fees to do our own work, let alone all that other stuff.”

Earlier, Victorian Government Architect Geoffrey London said that he thought the NSW office was in a, “complicated position”.

is there a full transcript available of what Geofftey London had to say.

The NSW GAO’s only flaw is that it provides a public service without the full support of the public purse. It is a genuine GA office. What is the role of the Victorian GA – is it lobbyist for commerical interests?

BZ was happy enough to take his taxpayer funded training at the GA’s office – a tad hypocritical. And Murcutt jnr’s stab in the dark at facts reeked of silver spoon entitlement. Both don’t seem to realise there are a number of NSW private practices already benefiting from the public purse – with or without the GA. Even Candalepes was overheard after the session claiming the GA did not do any decent work (reckon they have more RAIA prizes than any other practice in NSW) – he was quickly told to f*k off … and did.

@HD My notes on GL’s talk are a bit thin. I don’t think there are transcripts. He talked about the office and how it was located within government, how they are trying to qauntify the benefits of good design (adds value) and costs of bad design, referring to CABE in the UK and the pebble project. He talked about their god design publications, and their FTE staff levels (8, 2 funded by other departments). He then spoke of an upcoming book about small practice, their policy-making, and design workshops (Fed Sq East was an example). He then spoke about the problem of multi-res costing more than a single detached house, PPP, and briefly spoke about affordability forums and the bushfire homes service. Ther my notes end.

Ha ha – Corrigan had a rambling story about god and design at the conference. But not London.

VGA should have crossed his legs.