I’ve just woke up two hours early today from a dream that may have turned into a nightmare. I was living in Christchurch. Looking around me, a sizeable chunk of Melbourne’s architects were living there too. A few trams had made the journey too. I went on one house visit. The place was a bit like one of Boyd’s tiered hillside houses, except that each tier had moved independently of the others in the earthquake. I think the experience of that was disturbing enough to wake me up. Or maybe it was the bevy of noisy architects sitting on the top level in tricky chairs. Obviously time to check out what has been happening in Christchurch since the February quake. 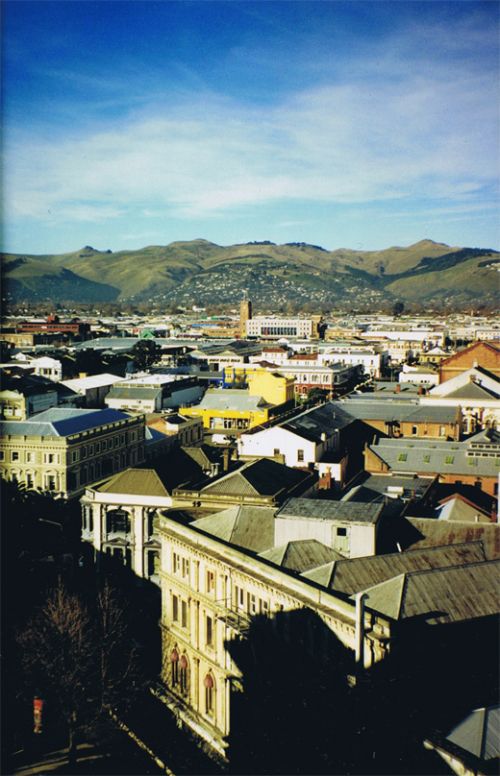 I have talked with a lot of architects, from Christchurch and not. The scale of the damage is daunting, even though is has now been dwarfed by Japan’s own catastrophe. The task ahead is immense.

Napier
Those architects in the dream remind me of something a friend said the other day. In 1931 the entire graduate architecture class at Auckland University was apparently transplanted to Napier, following the earthquake that knocked that city of 18,000 flat. Many architects went with them – my own grandfather would have but my grandmother vetoed the idea. These days Napier’s concentration of art deco buildings are the city’s main tourist attraction, and are important to the city’s sense of itself.

“The one lasting and wholesome result of that old time cataclysm, is that it made possible the building of a modern and lovely city… It acted like an annealing fire on the courage and enterprise of the inhabitants, and the matchless results of their high endeavour are on view for all beholders.”
NZ Railways magazine, Vol 1, 1935

Speed
Napier folk were aware that time was of the essence, or they would lose out to nearby Hastings. 90 year old Napier architect Guy Natusch, who was 10 during the earthquake, said last week: “In times of war or earthquakes, you’ve got to cut through that [tape] and give people extraordinary powers and trust them.” Just who will those people be?

The need for haste is questioned by M3 Architects, currently working on some rebuilding projects in Brisbane. Michael Banney recently said , “In some ways haste is the enemy. To put it in insurance terms, things are often rebuilt ‘like for like’, which is a fairly poor way to rebuild.’‘

CBD
The word from Christchurch isn’t cause for optimism. Modest insurance payouts will cause replacement buildings to be cheaply constructed. Considering that 852 of of 3691 inspected CBD buildings have been declared unsafe, and many of them formed the historic fabric of the 19th Century city, we could be looking at a city of low-rise mock-Victorian tilt-ups. And that’s just the CBD.

Delays may endanger the process too. Businesses frantic to recommence work have scattered all over the city, where they have been blackmailed into ten year leases. The rebuilt CBD of 2026 will be noticeably smaller.

The search for bodies ceased last Monday. Demolition has been in full swing since the quake, as part of the search operations. A number of intact buildings have been “taken apart” to provide safety to workers in adjacent unsafe buildings.

Some modern high-rises suffered enough damage to warrant them being demolished. Two of these buildings lost their stairwells, a rather crucial element in an earthquake. The worst off is the 26 storey Hotel Grand Chancellor, built in the ’90s. It suffered from seismic movements that pushed the building about a metre to the side and lowered parts by up to three metres. Some nasty close ups can be seen here. The building has been propped up at the foundations with mass concrete, staving off earlier intentions to implode the building by pounding it from above (somehow). It now looks like it is going to be demolished rather gingerly, piece by piece.

After rescue come rebuilding and recovery. The body in charge, The Canterbury Earthquake Recovery Authority, has yet to be officially formed. No one has yet been appointed to head the new authority. This is causing a few red faces.

Housing
After the central city media blitz, and after the international news crews had gone home, the damage to the suburbs started to receive some attention. Over 3,000 houses have been tagged for demolition, with another 7,000 expected to follow. 300,000 tonnes of silt has so far been removed from suburban properties. 70,000 have left the city of 400,000 and many others are sharing accommodation. Demand for housing has seen the Department of Building and Housing request proposals for 5,000 to 10,000 modular homes to be placed on lands being identified now.

Architects
Architects appear to have been a little absent from civic discussions about the rebuilding of Christchurch. Warren and Mahoney quickly set up a working group of architects and allied disciplines but little has been heard of their work, yet. W&M director Peter Marshall was busy fielding press calls earlier in the month though. He has suggested in the last month that, “the height of the city will drop”, echoing a common sentiment that no one would want to work in tall buildings. Interviewed in The Australian, he said that the think tank had to operate independently of government. “We can’t allow the whole process to become bogged down by bureaucracies.”

Disaster relief architectural organisations
The Auckland branch of Architecture for Humanity is working with the Unlimited State School in Christchurch to facilitate pro bono design services. They are also initiating design studios in universities around the pacific rim. More here

In the next post, when I get to it: ideas for the rebuild, and the damage done to some lesser known, but very important buildings.