On "Eames: The Architect and The Painter" 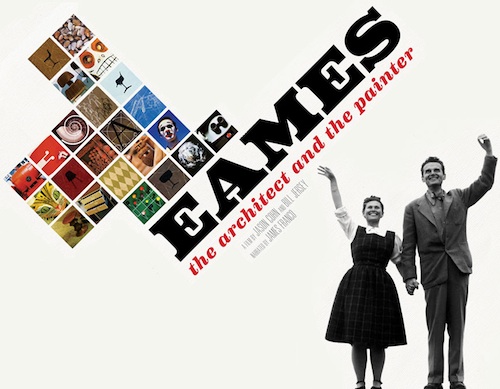 On Tuesday I snuck in, as a “plus one”, to ACMI’s preview of the new Eames doco, “Eames: The Architect and The Painter”, not sure what to expect. It was long, but it was good. It must have been hard compressing an odd fifty years of career into 83 minutes, and it did feel as though some stretches of time were skipped over. There wasn’t too much of the Sixties, unless I dozed off, which I doubt.

The film seemed to have two main zones of investigation: the complicated creative partnership between Charles and Ray, and their cross-disciplinary practice. Interviews with stylishly ageing Angelinos who used to work in the office are intercut with rare footage and photos of life in the studio. The employees seemed a tolerant lot, mostly seeming quite happy to be ‘exploited’ by a charismatic and ‘proper’ master. This was a studio that apparently never closed, life and work being very much entwined for Mr and Mrs Eames.

Their work too was intertwined and complementary – the Eames’s output stemming (for the most part) from the fusing of two minds – a neglected aspect the film very much wants to promote. The studio’s output was not quite as cross-disciplinary as I had imagined, more a progression from furniture design to a dominant focus on film making and communications, with a famous dabble or two in architecture along the way.

I don’t want to spoil any surprises for those considering attending, so I will keep this short. Go, be surprised and amazed. What I will do is embed some of the footage that the film sampled, some of it newly released by the Eames Office. If you want to see these at the film, just don’t click play!

Possibly the most awkward TV interview I’ve ever seen. It starkly shows the difficulty people had accepting Ray as an equal design partner.

IBM at the Fair. The film of the Eames / Saarinen IBM pavilion at the 1964-5 New York World’s Fair. Hello Koyaanisqatsi?

Many of the following films show an unusual regard for scale, often zooming into macro for a slow pan with a limited depth of field, revealing the intricate detailing of.. a hand, a toy train, anything really. There is a fascination with contraptions and mechanics, the way things go together, and the way people use them. This perhaps even extends into the circus films and the off-the-shelf components of the Eames House.

Powers of Ten, from 1977. A film seeking to engage school children with maths and science, preempting Google Earth?

And, of course, the trailer.