It’s been a hot, disturbing, and emotional weekend in Melbourne. Two large fires extending 80 kilometres along the rural northern flank of the city, have so far burnt up 210,000 hectares of land, 750 houses, and some small towns. Altogether, Victoria’s 2009 fires are known to have killed 181 people, most of them on Saturday. Many more are still missing as over 4,000 fire fighters continue to battle the fires.

Melbourne architect Peter Elliott’s family managed a narrow escape from their five year old house in St Andrews when they found a CFA crew in a nearby driveway. “Without them, I hate to think what might have happened to us.” Their house was destroyed. “Our home is gone. We haven’t seen it but we expect to find total devastation. Everything is gone. We knew in our hearts it was likely to go.” ( Age article )

Another Melbourne architect, Juliet Moore, reported that her Kinglake West home (see photo below) was surrounded by fire on Saturday afternoon. A helicopter tried to winch them to safety but had to retreat, leaving behind one policeman who drove them out through the fire – guided by the helicopter above. Her house was one of few to remain on her road. “My house is still standing, the fire seemingly tracing a path around it. I can only assume it was the fire sprinklers that saved it.” ( 11.02.09 The Herald Sun has now written an article about Juliet ) 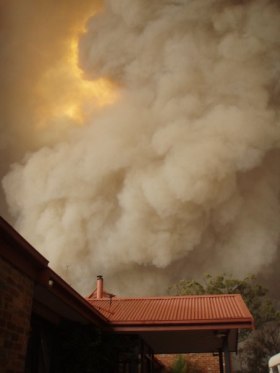 (Most information compiled from ABC and The Age reports to midnight Sunday, with later updates)
ABC: Bushfire emergency
The Age