Way back in 2002, the new Urban Growth Boundary looked something like this. We were assured that this would accommodate growth for 25 years. The light green areas are the green wedges, and the pink areas are the urban growth zones at the time. Positively svelte. 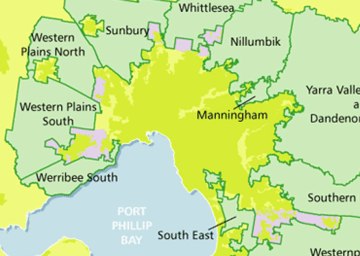 Back then : “The application of the UGB around metropolitan Melbourne, as provided in Melbourne 2030, will show clearly where metropolitan growth will occur and where ongoing incremental expansion will stop. As the boundary will be permanent, other than in defined growth areas, there will be greater certainty for green wedges.”

In November 2005 the “interim” boundary was extended to look like this (the dark grey areas are new urban growth areas): 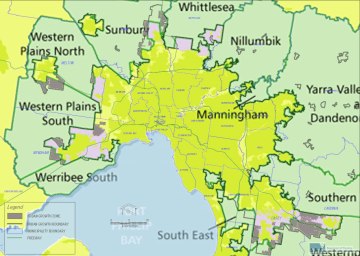 Here it is again showing 2005 built up areas in grey. 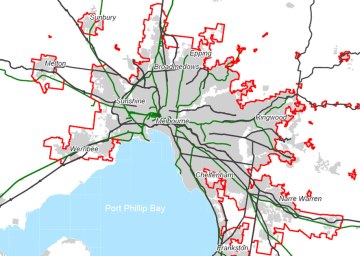 In 2009 the boundary is to be extended to look like this: 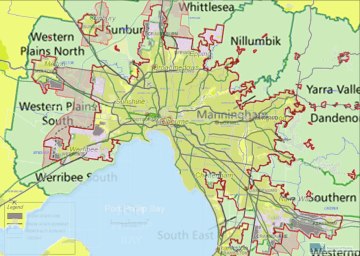 The boundary goes way off the map in the North, extending to waterless Wallan. You can see a tidier version of this last map at the DSE ( PDF here ) – but strangely it is missing the 2002 boundary and the green wedges (must have forgotten them).

So we must need the space, eh? Maybe not … Dr Hugh Bradlow : “Even Los Angeles, renowned as a spread out city, has a population density which is 7 times higher than Melbourne. Take any major European or US city and you will find that it has a significantly higher population density than any Australian city.”

The question forms in my head, how much is this expansion due to the lobbying of Camberwell NIMBYs and HIA / IPA spruikers, and how much is it to do with the affordable and sustainable growth of this city?