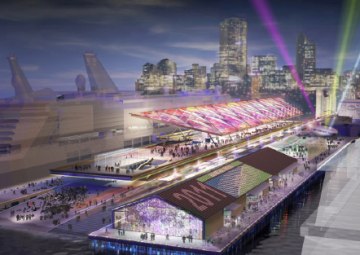 Another local high profile competition sinks into a brawl?

Brian Rudman at the NZ Herald has been closely following the competition – which has just completed Stage 2. Stage 1 winners were briefed further by ‘technical and design experts’ before being given another 3 weeks to come up with their final, less outrageous submissions. He has penned a number of provocative articles which are lowering the morale amongst the Stage 2 architects and may cause the whole project to be scuttled.

In a recent Rudman article, Auckland Regional Council chair Mike Lee spoke out against the quality of designs last week, saying they were, “lacklustre, underwhelming and mediocre”. He was then was backed up by Auckland Mayor John Banks: “I have not yet jumped to a conclusion that the whole show has been a waste of time, because at the very least, at not very great cost, we have got people thinking of this.” All a bit odd as John and Mike had approved the judge’s selection earlier.

That “not at very great cost” was a slap in the face for the 237 entrants who spent, on average, 32 hours each on their entries. If that sounds like a short time, bear in mind that we (yes I was one) were only given three weeks to do it, most of which was spent trying to untangle the large and contradictory brief.

That brief is also under fire. It was weighed down by prescriptive requirements for a big box cruise ship terminal on the east side, and a 12MB heritage report which gave the distinct impression that at least one of the large old wharf sheds should stay.

Most of the entries take a softly softly approach to the development, aware that time and budget are not on their side. The development has a paltry $47M budget and is due to open in 2011, so most finalists concentrated on the bare essentials and marked off space “for future development”, when there might be some money to spend, and a need to attend to beyond the Rugby World Cup “Party Central”.

Softly softly doesn’t work well with the herald letter writers, who want something ‘world class’ and ‘iconic’ – an example being someone’s proposal for a giant kiwi on the end of the wharf.

Rudman also questions why the Posts of Auckland come out of this so well – they sell the crumbling wharf (1860/1908) to the public for $40M on the condition that the public spend another $27M building a cruise terminal on it for them. Sounds like a deal! But this was known before the competition so why bring it up now?

Some are now questioning why Auckland needs a new cruise terminal for idly rich american geriatrics who are advised to eat on board lest they pick up a tummy bug, when one was built for them in the late ’80s. But that leaky development – Princes Wharf, was so jammed full of hotels, restaurants, and offices, that today’s larger ships can no longer be effectively serviced (and they block the view).

If a final winner is selected from the final eight (final seven really as two are the same design by the same architects), we will find out in less than a week. If you’re in Auckland, pop down to Quay Street to see the entries – the room was empty when I visited.

The NZIA is noticeably mute on the issue – many of its spokespeople are involved with the final entries.

i’m over looking at drawings with the same cut out happy people running around in them. who would have thought computers would be lamer than airbrushes. pull the plug.

I’m not sure cutout people are terribly happy with their lot.

Mayor Banks halts development due to lack of “wow” factor.

This could be fixed with one demolition drawing.
(Deletion is a reasonable proposition)

“No doubt there’ll be lots of excuses from the design gurus about the inadequacy of the brief, the shortage of preparation time and the stinginess of the budget.

All of which is true. But all these shortcomings were obvious from the day the contest was announced. That’s when the heavyweights of the architectural world should have spoken out, should have boycotted the exercise.”

Righto. So architects who give a damn about the waterfront should have boycotted the comp – leaving it to those who don’t? This mess will leave such a foul taste in mouths about town that the Auckland City will be lucky to get any gratis design advice from architects again.