A new 90 hectare suburb in Tianjin, China, is set to get a Melbourne theme. This doesn’t mean that it will be encouraged to sprawl with inadequate public transport, we ‘re talking more of a postcard version of Melbourne.

Premier Brumby has been in Shanghai talking at the Liveable Sustainable Cities of the Future Forum, a Victoria Week presentation at the 2010 Shanghai World Expo.

Brumby: “Melbourne is renowned as one of the world’s most liveable cities and it is a tribute to our reputation that an entire development in Tianjin is set to be based on how our city looks and feels.”

“The developer of this proposal visited cities all over the world before deciding that they wanted to base this new suburb on the great city of Melbourne. “

“Architektonic’s design concept includes a ‘Melbourne’ street intended to be reminiscent of iconic streets such as Acland Street, Brunswick Street and Lygon Street with outdoor cafes, restaurants and retail shops designed to take the spirit of Melbourne to Tianjin.”

Let’s hope they like coffee and cake. According to Architektonic’s company profile ( PDF ) the Flinders Lane-based practice has also designed the World’s first Eco-AgriCity in Jiangsu and is currently planning the design of a new World first Eco-Health City.

The press release continues… “It is intended that the development would be both a major residential development in Tianjin but also attract visitors from Victoria, Australia and across the world to view its Melbourne likeness.”

That’s an odd assertion – that people from across the world would travel to a Chinese city to see something that looked like Melbourne. I guess the travellers surveyed have been into Baudrillard. China is no stranger to themed suburbs and casinos, and sometimes they can be more interesting than their distant ‘real thing’.

The suburb is part of a large area receiving a lot of Victorian attention, via AUS cluster , an alliance of over 50 government-backed design professionals working on $25B worth of urban development in China. AUS Cluster was initiated by Lab Architecture Studio in 2004.

Lab have completed the master plan for Qilin, in Tianjin, about which they say:

lab’s approach to the qilin site is to evolve and develop the framework structure from an analysis of the site’s ecological systems and an understanding of its existing conditions. rather than approaching the site as a tabula rasa, lab use the existing landscape, water courses and ecologies, inhabitation patterns and infrastructure to inform the town’s future development and shape the creation of its overall urban form. 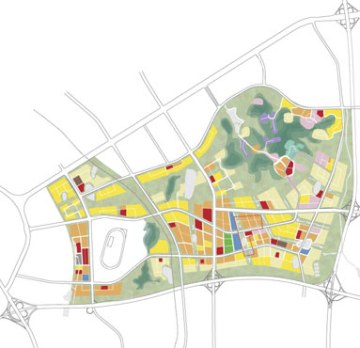 While it is interesting to see these local architectural firms supported by the Victorian government and masterplanning cities in China using principles gleaned from Melbourne, there is a stark difference between this and Melbourne’s own new town masterplanning , progressing within a housing developer-led framework, apparently without architectural or urban design input.

Posted by Peter on 22.05.10 in urban planning and weird and wonderful