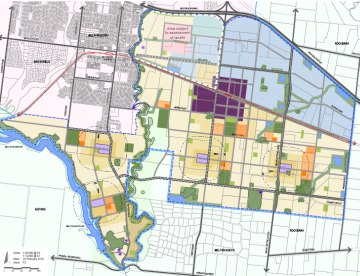 A new $15B city is to be built on the road to Ballarat. It’s called Toolern, and will plug lots of the rural gap between Caroline Springs and Melton. The new town’s footprint, if overlaid onto a map of Melbourne, would stretch from Footscray to Collingwood, and Southbank to Flemington. She’s big. 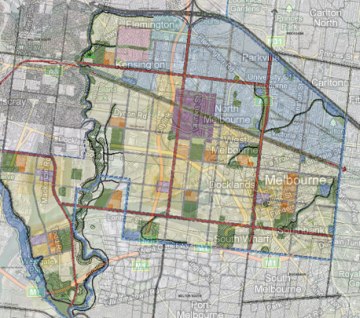 Toolern overlaid on map of Melbourne.

Toolern will have a “Major Activity Centre” at the top of the hill, about half the size of Melbourne’s CBD, which will be home to a train station and 70,000 sqm retail centre. Of the initial 30,000 sqm of retail development, one third will be supermarkets and another third big box discount warehouses. By 2026 this area will be home to 57,000 people, living in 22,000 new homes, both low and and medium density. By 2031, the population of Melton Shire as a whole is forecast to grow by 190,000 people, or 330%.

In Toolern, there will be a neighbourhood shopping centre every 1.5-2.0 km. The towns will include 18 community centres and Early Learning Centres, and eight sports pavilions. The Growth Areas Authority has many documents to view on line, and some make interesting viewing if you have the time.

For instance, how much will the infrastructure cost? The infrastructure to be funded by development contributions adds up to $177,000,000. Of that, $100,500,000 will be spent on roads, bridges and intersections. $36.2M will fund outdoor recreation, $29M community facilities, $6.3M fund public transport, and $3.8M cycle and pedestrian trails. 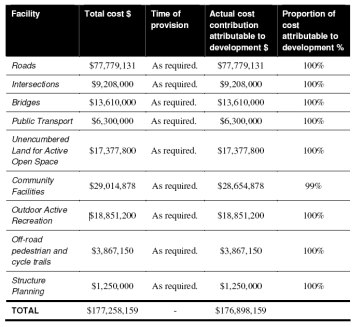 The plan of the new suburbs is chopped up in a similar way to most of Melbourne’s south eastern suburbs – 1 kilometre square superblocks containing mostly “conventional” housing subdivision, surrounded by 4 to 6 lane divided arterial roads. The superblocks will even be at exactly the same intervals as those in Melbourne’s South East. 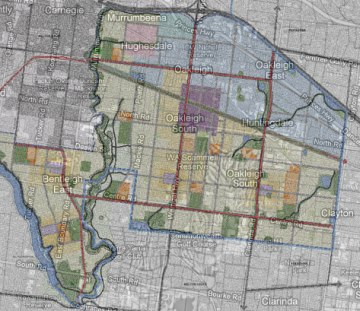 I had thought the superblock had been killed off decades ago, but not in practice. Superblocks and their divided perimeter roads are 70kph car-friendly suburban straitjackets. While they might make Melbourne faster to move around, they also force locals to drive short distances to get to shops and schools – it being too frightening to contemplate crossing one of these roads mid-block. 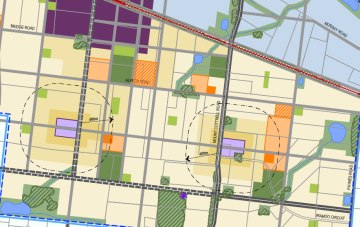 The arterial and subarterial roads are shown as double lines.

Maybe I am unduly concerned, and influenced by flashbacks of my attempts to cycle along Springvale Road (not recommended), and these new arterial roads do include off-road cycle lanes… But shouldn’t the design of a new town in 2010 investigate ways other than the hierarchical commuter road system that has helped get Melbourne into the pickle it is in? Is there anything in this plan to suggest increased levels of walking and cycling?

It has been addressed, and the result is apparently visible in the plans you see on this page. I can’t quite make out how they are different to the status quo. Booz & Co’s Precinct Structure Plan has admirable aims, and includes “off road” cycle paths (which are about 300mm off road). But that’s about it, other than some uncoordinated shared paths through green links. The authors of the Plan say ( PDF ), “these recreational paths are not expected to substitute off-road bicycle paths unless they have been designed in such way that both recreational users and commuters can use them safely and efficiently.” Is that a hint at what really needs to be done?

Adding cycle paths onto 1960s-style road systems doesn’t increase bicycle use or decrease car use. They tried this in the UK at Milton Keynes (PDF S.J. MacIntyre thesis 2006) and it didn’t really work, so why should it here?

“The Milton Keynes project illustrates the failure of well-designed bicycle infrastructure to attract cyclists, in the absence of policy measures to limit automobile use, or encourage safe bicycling. Wardman et al., support this notion, stating that, “a wider programme of transport measures than just improving cycle facilities is required for a significant modal shift to cycling”.”

“Discouragements to motorists, such as access restrictions, taxes, and other user fees, combined with increased transportation infrastructure for bicyclists can successfully shift people out from their automobiles and onto their bicycles.”

Bicycles are used for short trips mostly, not for commuting into the city on the arterial roads where the lanes are, so these cycle paths will stand empty most of the time. The few truly off road shared paths are alongside creeks and aren’t connected with where people might actually want to go. Opportunity lost?

Why the fuss about bicycles? I do bleat on about them, but so does… Maroondah City Council, who in a 2006 report on transport alternatives (PDF) stated that 40% of Melbourne car trips are under 3km. A car is at its most polluting in its first few kilometres. They say that based on their surveys, bikes could replace many of those short car trips if people felt it was safe enough to use one. 55% of home-cased car trips made in Toolern are forecast to be short local journeys.

Veitch Lister provided a transport modelling plan based on Zenith, the terribly complex Melbourne-wide transportation modelling scheme. They admit it has its limitations. It projects from a 2001 census base and doesn’t account for increased petrol prices, time-shifted commuting, increased parking charges, or changes in land use or public transportation provision. They qualify their report ( PDF ) saying that, “simply projecting historical urban growth trends into the long term future is not sufficient when analysing the impacts of major road and public transport projects…. The model makes no attempt to predict “paradigm shifts” in travel behaviour that might occur in the future. In fact the model assumes that such changes will not occur… It is not only plausible, but likely, that travel behaviour will change in the future in response to such issues as concern for the environment.” Their italics. They say in a later alternative scenario which reduces public transport and deletes the train station, and was prepared to satisfy the Department of Transport’s curiosity, that if fuel prices do increase their model ( PDF )will have, “over estimated car usage & under estimate[d] public transport usage.” Their earlier model assumes 81% of all trips will be made by car, 4% by public transport, and 16% by walking or cycling.

It would be good to see Melbourne’s new edge towns taking some steps towards future economic and environmental sustainability in their planning, rather than presume sustainability because the houses are 6 star and they’ve added a few bike lanes (marked ‘future’ ( PDF ), some high density housing, and local shopping strips.

After hours traipsing through these documents, some thoughts:


Having carved up the land, Melton Shire has put the suburbs out to the market. A developer will be announced in December. It may already be sewn up as a major developer has land interests within the area and contributed $200,000 to the structure plans.

The first subdivision for 463 homes, mostly low density, in the Western Precinct has already gained planning approval. It’s in a recently deleted Wildfire Management Overlay. Have a look at the plan and note that this is only 2% of the dwellings proposed for Toolern. She’s really big.

You raise some good points here, like Melton, Toolern is destined to be another pawn in the 1969 Transport Plan, a car haven of epic Los Angeles proportions. But one glaring infrastructure problem has been overlooked – rail infrastructure. A new city of that size there without good rail and a single station is going to be crippled. According to the Victorian Transport Plan duplication and electrification to Melton is unlikely to happen until after 2016 if we’re lucky. Even with the Regional Rail link (which won’t be ready until after 2014), there is NO WAY that V/Line can cope with an extra station on the Ballarat line. Currently by the time it reaches Melton it is packed in like sardines! Ballarat and Bacchus Marsh are booming and population is growing at 2.7% and 3% annually respectively and Melton over 10%. Based on current patronage growth, the railway line will nearly quadruple its passengers by 2016. I reckon any new residents at Toolern will be bloody lucky to get on a train let alone get a seat ….

Thanks for that info Sean, it all looks a bit SNAFU. From memory, the reports don’t take into account pressure on the train line, only that there is one.

agree agree agree agree dreamed about this last nite, trying to exlain to a planning minister (not justin, just a face) that it was all wrong wrong wrong. at least in toronto developers are required to build some higher desity housing, even if they do put it all in one big bldg, with a bus stop outside.

I had no idea of this proposal, will investigate further. Great post!

$100m on roads and a mere $6m on public transport says it all. How are these highly vulnerable communities going to cope socially and economically as oil production decreases and the costs of the method of transport, around which their whole community is built, increases?

There’s no doubt that any proposed new “town” or any urban area, be publicly-owned and publicly developed. It pains me to think that there are private developers out there vying for the land upon which to construct a profitable business. Surely we, the community, people, should get the first and only say in how we want our urban form and environment to look and function.

I can’t see how anyone could trust private developers with our urban form. They will bend, straddle and side-step the rules to profiteer before they even think about the detriment their actions will impair upon people.

And what of overpopulation? This continent’s carrying capacity is supposedly only 10 million, we’re more than double over that already.