In a compromise decision if there ever was one, powers that be in Auckland have decided to keep one of the two 98 year old industrial sheds on Queens Wharf, and to build a temporary $9M tent next to it. This was thought to be for Rugby World Cup hoons to party in and so was named “Party Central”. NZ Prime Minister John Keys has jumped into the fray of clamouring pollies to say that he doesn’t think people will actually be getting drunk there.

“It’s a place where there’s going to be quite a bit of celebration… [drinking]‘s one aspect of it but that’s not its role in totality.”

On the small matter of that abandoned design competition, Herald columnist John Roughan toes the line that it was reasonable to waste people’s time with a dud competition: “McCully and Lee were right to invite design ideas as soon as they had agreed on the wharf’s joint purchase last year. It was just possible an inspired idea was lurking in someone’s mind or bottom drawer.” Hmm… they would have been lucky, having briefed a booze barn next to a pensioners’ cruise terminal, on a rickety wharf half half-covered with “heritage”, and then saying it needed to be built in 18 months for a pittance. Oh right, I have one of those in my bottom drawer.

Still everyone I’ve heard has sounded mildly happy with the outcome. Maybe not Jasmax, who will now have to start all over again – the slug does not look like it wants to share the wharf with a big rectangular shed.

Thanks to the NZ Herald for the great coverage of the debate from the outset. 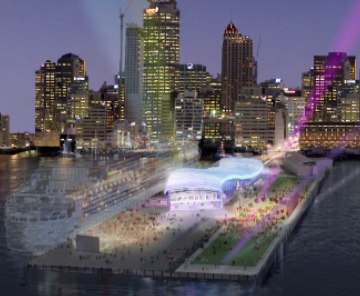