A month at Barangaroo

The month that was..

It began with David Neustein looking at Rogers’ Barangaroo and seeing… Canary Wharf.

I am looking at an image depicting a series of canals, which bisect the Barangaroo site, when it all becomes clear. These canals have nothing to do with Sydney, its harbour or its public. They have been copied and pasted from London’s Canary Wharf development. ADR

Neustein also questioned whether the ground floor shopping centre could really be counted as “public space.” In another recent article , Philip Thalis agrees. The proposal is for him, “a perversion of a genuine public domain.” The corporate towers hogging the foreshore are to Thalis, “like boofheads hogging the front row.”

Ex NSW government architect Chris Johnson writes in counterpoint to Thalis. He is rather keen on the proposal. This isn’t a surprise as he is deputy chair of the Barangaroo Design Excellence Review Panel. But his reasons for liking it focus on density and global leadership(!?) rather than design. Sydney will apparently get used to it – the protests are just a phase…

When I was the NSW government architect I researched the early building of our city. Every big new development brought outcries in the media. Even the sandstone GPO in Martin Place was attacked as too big, yet now we all love it.

Premier Keneally issued a press release (PDF) on September 30th, announcing that she was taking ministerial responsibility for the project, again justifying the development in global rather than local terms.

“Sydney has shown the world that it possesses creativity, vision and daring with the Opera House and the Harbour Bridge, and Barangaroo is another once-in-a- generation opportunity to show the world why Sydney is Australia’s only global city.”

Ms Keneally said it was clear that there is a small group in the community who want to derail the project.

“But I am determined that Sydney will not lose this unique opportunity. That’s why I am taking direct responsibility and control of Barangaroo.”

Some Sydney-siders must be starting to wish that they could lose that “global” title.
Keneally waded into the site only a few days after criticising Lord Mayor Clover Moore’s parting shots when she resigned from the Barangaroo Development Authority. Moore resigned citing a lack of accountability and transparency on the day her council lodged with the State its 108 page opposition (PDF) to Lend Lease’s proposed modifications to the Concept Plan.

She summarises the City’s points on her website thus:

The City also suggests that a minium of 10 architects should design the different waterfront buildings and that the architects be decided in competitions. Another concern is that the diagrammatic building shapes do not tally with requested GFAs – in some cases being almost 100% out. 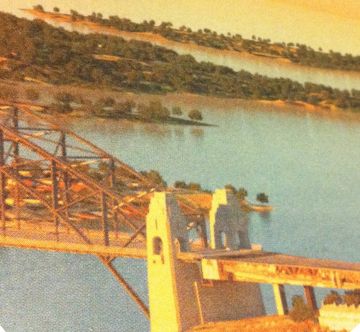 Sydney architect Adam Russell was perusing the Central’s printed version last month and happened upon a glossy advertorial for “Barangaroo South”. In a double page photo, Sydney sits under a warm sun, the new buildings seamlessly blending with the old. But Adam notices that it isn’t Sydney! It’s had the botox. The North Shore has been returned to a building-free Arcadia, circa 1800. The traffic-free harbour bridge arches has the wrong arches. Various important harbour islands have gone missing – rising sea levels?

Looking elsewhere, at the Barangaroo website, they are building quite an image library. There is an image set for the curvy new headland park, which is a fattened version of the 1836 foreshore. Embankment sections show that the park has been designed to suit current high tide levels, as well as the project level for 2100 – 900mm higher. Wow. But that’s only half what the IPCC dreads if the ice sheets melt. Maybe it will be more Venice than Canary Wharf. 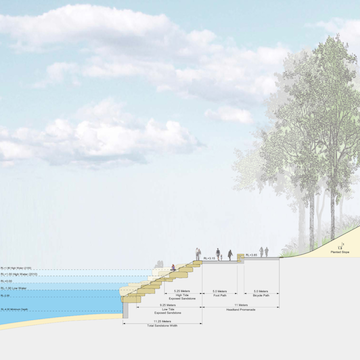 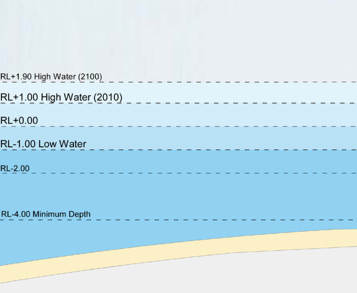 Elizabeth Farrelly seems to be dreaming of Venice in her October article on barangaroo, which mainly looks at the politics and protest groups. She then questions the break up of Barangaroo into two parts – the Southern commercial area, and the Northern “Point Keating” park. Entwine the two she says, mix up the parks and the buildings and the water…

Perhaps the entire development should have its feet in the water, and all travel by gondola. Perhaps the footpaths themselves should be tidal, the buildings traversable, and the old MSB tower a great landmark work, painted in traditional lighthouse stripes and topped with a sculptural tide-indicator.

And that’s just a few weeks in the history of Barangaroo. Exhausting.

And this just in from the Hearts and Minds Department. Lend Lease’s Beauty of Barangaroo website. It just keeps coming. 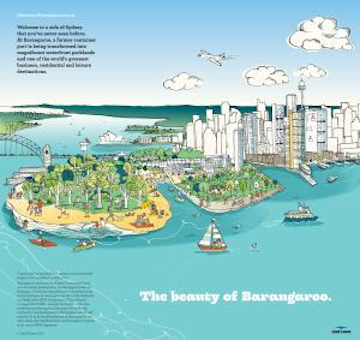