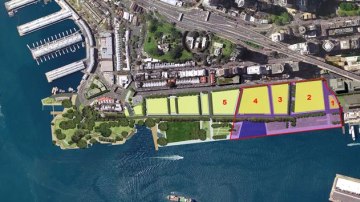 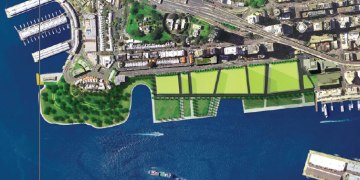 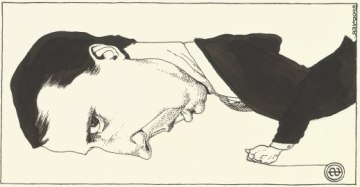 Former Prime Minister of Australia, Paul Keating, has over the last decade or so made known his interest in the built fabric of Sydney. He has been involved in the East Darling Harbour project since he was a member of the jury of the 2005 competition. Last year he was appointed to chair the Barangaroo Development Authority , which has been steering the design development of the East Darling Harbour design behind closed doors.

About this time last year, the winners of the 2005 competition, Philip Thalis et al, vented in the SMH that their design had been steadily nibbled at by planners and financial engineers… “eroding the integrity of the competition project.” The leasable area of the project has escalated from 300K sqm to over 500K, and “superlots” have been introduced – big developers will control big land parcels.

Keating and friends were also busy snipping away at the site design during this time. The SMH reports, “after the judging, Keating had no formal position but he was the man to whom the competition winners were sent to discuss the modifications.” Modifications that Keating happily admits are his own. The SMH:

Unknown to most, his personal vision for the disused container wharves at Darling Harbour has quietly been confirmed in documents ticked off by the Planning Department last week. He’s got what he wants and is happy to take the credit. ‘‘I am fundamentally the founder of the scheme,’‘ he said after the documents were released.

This picturesque vision requires a great area of the wharf to be demolished to affect a natural coastline, not to mention an artificial hill full of cars smoothing the lines of Millers Point. Keating couldn’t believe Thalis and all the other architects hadn’t done that (possibly due to the northern side of the point being outside the 2005 brief).

The winning architects have not been spotted on any of the official sites for a good while. Paul Berkemeier was on the design review panel until it was phased out. The winning designers have been shown the door, and the development panel who apparently know better will finish it off.

The mud is being thrown higher and higher. ®AIA NSW President Brian Zulaika wrote a letter in the SMH last week. After comparing PK to Prince Charles, he wrote that “any worthwhile public space needs the combined skills of architects and landscape architects – and an enlightened client.” Keating got the jibe, and responded with this ranine piece. “I notice Brian Zulaikha, running out there, little toady, running out there supporting the architects. They were quite happy for me to urge the Carr government to reserve half of Barangaroo for open space so they can then go out there and put the hand of man and concrete all over it.’‘

Odd that Keating finds it sycophantic for the NSW Institute president to be supporting the design professions. And it’s just too late at night to know where to start with that “hand of man” comment.

It all sounds and looks such a mess that perhaps the whole project should be mothballed for 20 years. Just turn it into a carbon soaker in the meantime. The half million square metres of workstations and attached workers could be put somewhere else… how about Penrith? 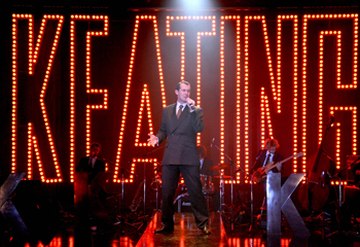 PK is right – “Thalis is not up to it”. OG design is as big a piece o shit as xPM’s boring gardening effort. All as bad as each other. Hairdresser could be bothered getting worked up if it was over a Rem K 25 year ago Parc La V. or something = 2 rad. but …its just BZ mixing his viagra up with his valium over nothing.

E L can get a free haircut any time he likes at my salon. Sour grapes at being second? Take a look. Don’t think so – were better designs than Thalis rubbish, the Lipp’s among them. EL = architect thinking hardcore and talking architecture – instead of shutting the guild doors on behalf of mediocrity. B Z should move to mexico – he’d be right at home in the capital of the mouth zipped scared of the old man with lollypops SGA hanging around their playground.

Keating… you’re living in the past. Leave the design of Barangaroo to those who dedicate their lives to improving living standards through design. Suddenly politicians and developers know more? Give me a break. All you care about is your back pocket. Keating, you’ve been untrustworthy since your involvement with the labor govt. Get a life scumbag.

How the f*ck did some illterate Brit architect (ie Rogers) pick up the commission via comp winners? Labor/Opera Hse all over again?

Keating = No idea about architecture.