Paul Keating has resigned from his role as director of the Barangaroo Design Excellence review panel. The chronology of events went something like this:

- Lord Mayor Clover Moore, past member of the DERP, this week lodged a 10,000 signature petition to the new state planning ministry, calling for an inquiry into the Barangaroo development process. She lodged it on behalf of Australians for Sustainable Development. AFSD is led by Jack Munday OA, and apparently supported by the NSW branches of the PIA and AIA. They support the transfer of planning powers from state to local government, and are “pushing for a reversal on some of the worst planning decisions made by the [deposed] NSW Labor Government.” Jack Munday is a well known local identity and sat on the judging panel for the original East Darling Harbour competition, next to Paul Keating.

- The AFSD group released a proposal for a Better Barangaroo which is similar, but smaller. It adds buildings along Hickson Road, lowers towers, and dispenses with that hotel in the water. It maintains the line of the existing wharf and cruise ships moorings, rather disrupting Mr Keating’s naturalised headland park. Their Hands off our Harbour website lists 60 supportive architects and planners. 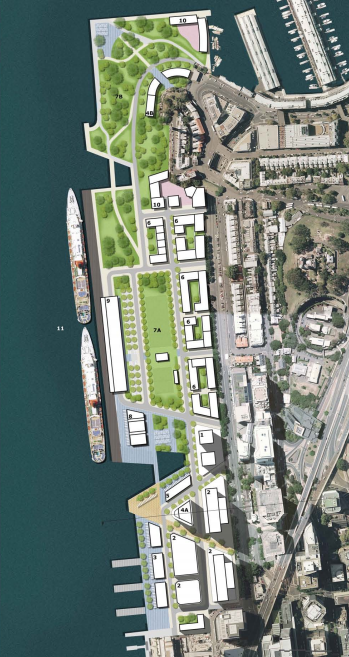 - Paul Keating took offence at Clover Moore’s lodging of the petition, calling her action “scandalous and irresponsible behaviour” on behalf of “sandal-wearing, muesli-chewing, bike-riding pedestrians”, pretty much taking aim at most of Inner Sydney.

- new state Planning Minister Brad Hazzard wrote to Keating on Friday asking if he would, “confirm to me that you will desist from any denigrating comments whilst you occupy the position of [chairman] and that you will give due consideration to all proposals.’‘ All proposals? It now sounded like the final Barangaroo design was not that final.

- Paul Keating responded fron Tusculum by fax(!) that this was nowt but an attempt to muzzle him, and he would have none of it. He then resigned.

- Premier Barry Farrell today disputed the muzzling, saying Paul just needs to learn not to denigrate individuals. And then: “[Barangaroo] is a significant development that is going to be part of this city and this state’s economy in the years ahead and we want to get it right.”

Well there you have it. It is all up in the air again methinks.

Over at the official Barangaroo website there is not a lot happening, though they do boast that Barangaroo was recently featured on Channel 10’s The Biggest Loser. The revised AFSD proposal should help it lose some weight.