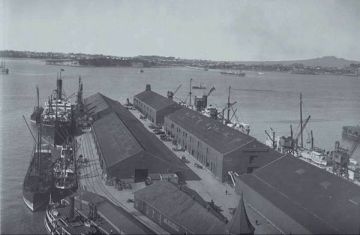 The architects-vs-the rest battle to keep the Queen’s Wharf sheds is getting hotter on the pages of the New Zealand Herald.

Background: A half-baked rushed competition was held late last year for the quick construction of a cruise ship terminal and “Party Central” for the 2011 Rugby World Cup. Competitors were informed by the brief that the 98 year old sheds had a significant industrial heritage status, being the last of their sort on the waterfront. Many entrants incorporated one or both of them into their designs. The competition was scuttled soon after a winner was chosen, the mayor saying at the time that at least they hadn’t had to spend much on architects.

The local council and regional council, who ran the competition, now support a scheme to demolish both sheds and erect a temporary Party central tent structure.

Architects have come out against this, the general sway being that the sheds are worthy of protection and shouldn’t be demolished without at least a long term plan for the wharf and its surrounds. Architect David Mitchell is leading a group of 21 prominent architects protesting. He says:

“There are noble structures beneath the battered tin sheathing of these sheds, and we now strongly urge Aucklanders to resist the current proposal to bowl them over and replace them with a new building.”

AUT history professor Paul Moon has replied in the Herald that given the track record of architects in Auckland, especially in the ’80s, they shouldn’t be entitled to be the “self-appointed arbiters of public taste” in this debate. For him, the sheds have no aesthetic appeal.

“The fact is that the sheds on the Wharf were designed purely for functional reasons, in an age where aesthetic appeal in industrial buildings was considered even less important than it is now.”

Memories of the Eighties cloud the argument. Architects were complicit in the development frenzy that saw many loved 19th Century watering holes, laneways, thheatres and arcades demolished. When Black Monday stopped developmers in their tracks, Aucklanders adjusted to the pockmarked city of barren at-grade car parks and corporate towers left in their wake. Some, like Moon, haven’t forgiven architects for their part in this – though many of the firms involved were Australian. Some architects, myself included, wonder what it is about Auckland that drives this continuing urge to demolish without considered and coordinated plans for the future. 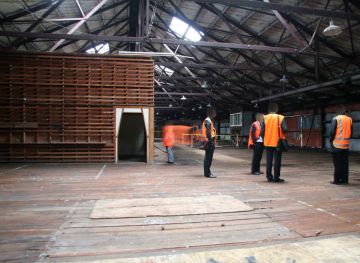 To demolish these heritage listed structures is a pretty poor excuse to make way for a temporary tent. Do they have any other plans for this site after the world cup?

I don’t think so. That would involve long term thinking. Update on site now – they are keeping one shed – easy compromise – lucky there were two of them.