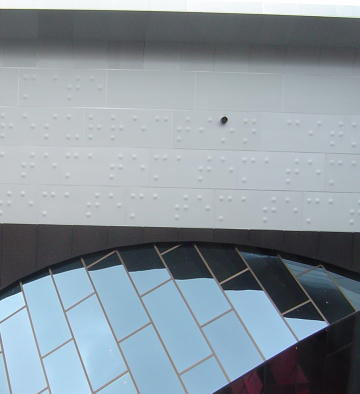 In a Weekend Australian in late August, Christopher Allen reviewed an exhibition being held at the National Museum of Australia. The review (of Yiwarra Kuju: The Canning Stock Route) is pushed to the end of a long spiel on the 10 year old building that surrounds it.

Those familiar with The Australian’s slant on things postmodern wouldn’t be too surprised that he belatedly laid into Ashton Raggat Mc Dougall’s building for being ideological.

…the museum building is an example of a particularly repellent style of postmodern political symbolism in which the whole shape of the building is meant to convey a message and which inevitably falls into the most teeth-grating kitsch.

The structures of such institutions, their development, and the struggles between competing interests and ideals are proper subjects for non-partisan reflection. Ideological thinking, on the other hand, is inherently partisan; and it is intellectually dishonest because truth and complexity are sacrificed to the supposedly higher priorities of propaganda. In an institution of learning such as a university or a museum, ideology is intellectual pollution; and eliminating it can be as hard as restoring any site contaminated by toxic waste.

So architects should look but not see?

Allen underlines his position by referring to the braille signage above the Garden of Australian Dreams and its occasionally political messages – now long obscured/censored by the addition of extra dots.

Miranda Devine “revealed” fragments of the translated braille in the Sydney Morning Herald in April, 2006. Hers is the first mention of the “forgive us our genocide” phrase that I can find, and she doesn’t state her source.

The mainstream media has picked up on the braille more than once, maybe due to their familiarity with text rather than form. Last year Rosemary Neill from the Australian visited the NMA, to look into falling visitor numbers, and again spends many column inches discussing the braille panels. The guide told her the panels didn’t say sorry at all, they said, “Sorry mate”. Neill then says, “In fact, the braille characters did once say sorry.”

Presumably referring to Devine’s articles, she wrote, “It’s also been reported that the original braille said “forgive us our holocaust”, but [director Craddock Morton] stops short of confirming this.” Hmm.. what does “stops short” mean?

I wonder if Devine and Neill had taken the time to peruse the 2002 publication, National Museum of Australia: Tangled Destinies. In it, the (apparently) full text of the panels is printed in more legible English on page 48. Sorry mate appears three time, but a solitary Sorry appears not once. Nor is their any sign of Forgive us our genocide. Raggatt does use the word Sorry and the phrase Forgive our holocaust, but it is in another section of the book (p.42), where he attempts to explain the NMA’s roof plan representation of Libeskind’s Jewish Museum. It looks like the NMA censored “Sorry mate”. A sorry saga.

Thought I would do a quick check from an old happy snap of mine: 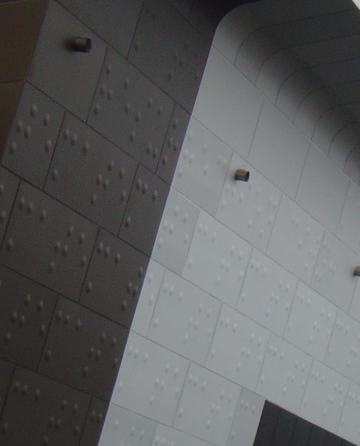 mate, mate, mate……, Resurrection City? , I hear they are planning a competition for a glass coffin to put it in to stop it melting in the rain.

Once again you have reduced an erudite commentary to your own base level; ‘looking and seeing’(!)
Christopher Allen was expressing an opinion about the appropriateness of an ideological approach to an ‘institution of learning’, and he justifies his opinion succinctly. Stop being an ARM toady, and research your topics fully before mouthing off at a critic well out of your league.

I may be an oik, but I’ve never eaten a toad.

Sorry mate mate mate but thats not chicken you’re eating.
Braille BS is smoke and mirrors in front of third world po mo. The garden of australian nightmares fading away and fenced off says it all, with second hand marxican “semantic” imprecision.

ARM sorry? can’t imagine them applogising for the rotting brain on swanston st and no one’s asking for one – melbourne is a toad town

Was a toad town last century now its a stagnant zombie toad pond.

^^^^ You should get a job with the Gippsland Press Corp. I hear they are looking for a slanted architecture critic.

Thanks for pointing out Mr. Allen’s failure in his review, particularly how hardly anything that he wrote actually ties into the exhibition he was supposedly reviewing (an exhibition design that specifically creates its own internal world and logic, detaching itself from the exterior politics as discussed here). To me, this is the epitome of ideology gone wrong…