Reading Kurt Vonnegut’s Cat’s Cradle recently (a good read), I realised what the roots of this name might be. In the book, Mona is the beguiling beauty – apparently the only beautiful woman on the Island of San Lorenzo, and the daughter of a Finnish architect. Vonnegut himself was the son and grandson of architects. He said his father’s only advice to him was not to stick anything in his ears and not to become an architect.

The island’s dialect contains many a strange word, and one is ‘foma’. It means ‘lies’ as in ‘a pack of foma’. These “harmless untruths” keep the country stable. In Walsh’s cradle, FOMA has become the Festival of Music and Art. Walsh let the cat out of the bag in an interview with Le Figaro last year, and Mathhew Denholm of The Australian picked up on it in 2011. 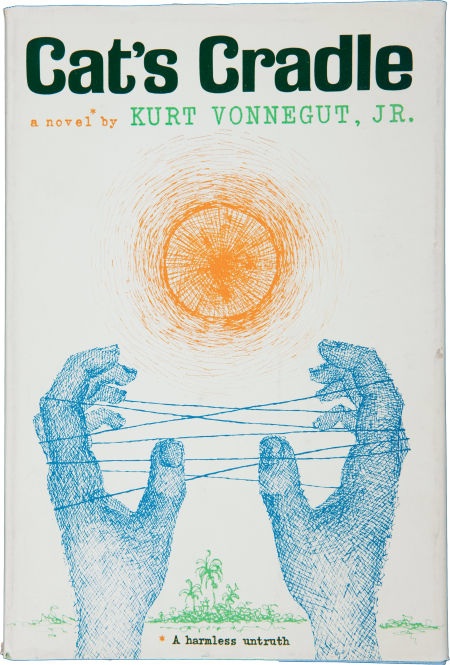 So that’s what Walsh has admitted to, that I can find. He has plenty of other things to say about influences though, which are well-covered in David Neustein’s 2011 review. Architects Fender Katsalidis give very little away about the origins of the design, saying it was inspired by Greek rock fortresses. Walsh mentions Naxos. Schematic architects Tandem have even less to say, but have some great photos of early citadel-esque models on their MONA webpage. 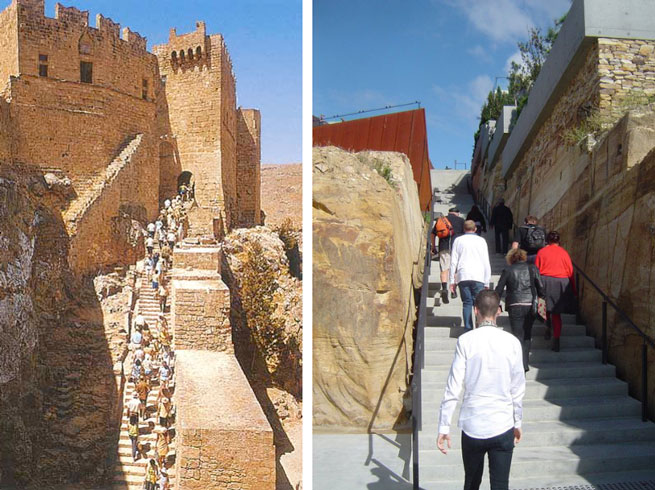 Walsh may have revealed more in his gilded new memoir Bone of Fact , which he wrote in the style of Vonnegut. But I’m still saving my pennies for that one. Anyhow, I decided to dig a little deeper and see what else turned up. Some of it will be B.S., but hopefully interesting B.S. I think that a few of these snips influenced the shape of things at MONA, and I think it was for the better. If you’ve not yet been, a lot of what follows won’t make much sense… maybe even if you have been.

A Fantastic Fortification
The president of Vonnegut’s San Lorenzo, a small and fictional island in The Caribbean, lived within an imposing edifice by the sea. It was built by a mad slave-turned-emperor who copied it from a child’s picture book.

“A maniac, Tum-bumwa caused to be erected the San Lorenzo Cathedral and the fantastic fortifications on the north shore of the island, fortifications within which the private residence of the so-called President of the Republic now stands.” Cat’s Cradle, chapter 57

“We at last came to the castle. It was low and cruel and black. Antique cannons still lolled on the battlements. Vines and bird nests clogged the crenels, the machiolations, and the balistrariae. Its parapets to the north were continuous with the scarp of a monstrous precipice that fell six hundred feet straight down to the lukewarm sea.” Cat’s Cradle, chapter 95

The oubliette
Within the Prsident’s residence is a large square anteroom with a manhole cover within it. This lead down to ‘the oubliette’ – a drop-and-forget type dungeon, accessible only from the top. A ventilated and stocked bomb shelter had been retrofitted into this dungeon by the reigning despot. The oubliette may have been inspired by the underground cellars of the “meat locker” Vonnegut and other prisoners of war found themselves in during the bombing of Dresden in 1945, known as Schlachthof Fünf (Slaughterhouse-Five). The only reason they survived the firestorm was because they were held in isolated captivity. Similarly Mona and the book’s bumbling hero Jonah survive an ice storm in their own oubliette. Rather than being prisons, these dungeons became arks for preservation.

I visited MONA during the first exhibition, Monanisms. It could equally have been called Meat Locker, given many of its displays (one even being a rack of meat). The MONA dungeon is entered through a deep circular drum staircase from the Roy Grounds house above. I vaguely remember that we were advised to take the stairs for the best experience. Déjà vu – all of a sudden it was 1989 and I was tramping down the emergency spiral stairs in one of London’s smaller tube stations. The lifts were off again. These stairs provided wartime access to tube station platforms, which doubled as air raid shelters in WWII – more arks. 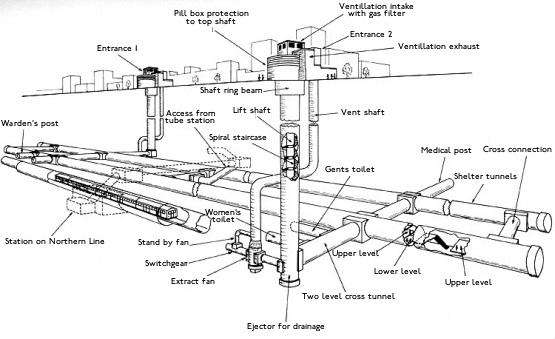 This illustration shows some purpose-built “deep” shelters, which were intended for later use as the Northern Line. ( source ) 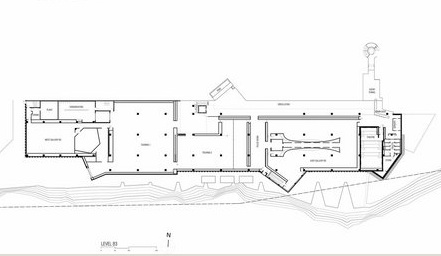 MONA basement 3 – the spiral stair is at top right. ( source )

Is Tasmania an Ark?
The state of Tasmania is almost at the end of the world, if you’re over at the ‘centre’ of things. Utah lawyer Martin Polin certainly thought so – during the Cold War he purchased 18,000 hectares of prime Tasmanian wilderness to use a a bolt hole in case of nuclear catastrophe. He even had bunkers built, which you can see here . His own survivalist ark. Perhaps MONA can be read as an art ark? Though it wouldn’t function too well in a biblical flood. 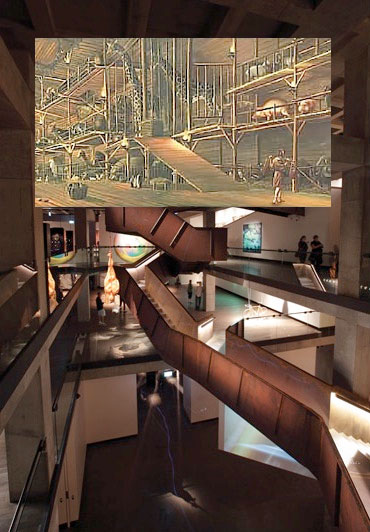 The Other Monas
‘Mona’ has other significance in Tasmanian history. In 1865 Robert Quayle Kermode built what is thought to be the largest home in Australia at Mona Vale, a property north of Hobart. His father named the property in about 1824 after Castle Mona (1804, Isle of Man), another imposing castle by the sea. Robert Kermode’s house, which is partly modelled on the original, apparently contains a room for each week of the year, and a window for each day of the year. So it’s also known as “Calendar House”.

Speaking of castles, Julian Castle is a character in Cat’s Cradle. Sugar millionaire, draft dodger, and playboy, at forty he sought to make amends by following Albert Schweitzer’s example and building a free hospital in the jungle of an impoverished state. The House of Hope and Mercy was designed by Mona’s father, Nestor Aamons. cf…

“Mona, then, is a one-man, self-imposed gambling levy, ploughing tens of millions of ill-gotten gains – as some might see it – into high forms of human expression.” The Australian, 2011

CROSSES
The symbol for MONA is a cross sign and a plus sign. David Walsh is a bit clever with numbers so that’s not too much of a surprise. But then there’s this little discussion in Cat’s Cradle about the string game cat’s cradle:

“He held out his hand as though a cat’s cradle were strung between them. ‘No wonder kids grow up crazy. A cat’s cradle is nothing but a bunch of X’s between sombody’s hands, and little kids look and look at all those X’s…’ ‘And?’ ‘No damn cat, and no damn cradle.’” Chapter 74

H.G. WELLS
Science fiction novelist H.G. Wells visited General Electric’s office near New York in the early 1930s and was entertained by Nobel-winning chemist Irving Langmuir, who we can thank for artificial snow. Vonnegut later developed Langmuir into Dr. Felix Hoenikker in Cat’s Cradle. Langmuir hoped to inspire Wells with an idea for a type of water that was solid at room temperature. Wells wasn’t that excited, but Vonnegut later found out about it while working at G.E., and from his brother Bernard. Bernard had worked with Langmuir and was accomplished in his own right, developing cloud-seeding in 1946.

Kurt’s fictional scientist develops a version of crystallised water called ice-nine, a lot more dangerous than either Bernard Vonnegut’s or Langmuir’s contributions. Ice Nine is present today in Tasmania, but only as a climbing route in Coles Bay. (By coincidence, the first photo I found of it shows a friend of mine scaling the fractured rockface.)

H.G. Wells’ path-crossing with Vonnegut doesn’t stop there. Towards the end of Cat’s Cradle is the chapter The Tasmanians, where Vonnegut describes the tragedy.

“…They were so contemptible in the eyes of white men, by reason of their ignorance, that they were hunted for sport, by the first settlers, who were convicts from England. And the aborigines found life so unattractive that they gave up reproducing. I suggested to Newt now that it was a similar hopelessness that had unmanned us.” Cat’s Cradle chapter 125 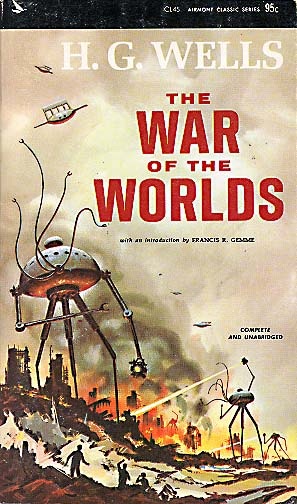 H.G. Wells was inspired to write “War of the Worlds” (and set off an alien invasion fad) after discussing the same events with his brother Frank. He refers to the Black War in the first chapter of The War of the Worlds, suggesting it was comparable to a Martian attack on England.

“And before we judge [the Martians] too harshly we must remember what ruthless and utter destruction our own species has wrought, not only upon animals, such as the vanquished bison and the dodo, but upon its inferior races. The Tasmanians, in spite of their human likeness, were entirely swept out of existence in a war of extermination waged by European immigrants, in the space of fifty years.”

Vonnegut’s interest in genocide stemmed from his personal memories of the Dresden bombing, a mass-killing that Vonnegut blamed on ‘bureaucratic momentum’ in the British War Office, and which inspired his most well-known book, Slaughterhourse Five. In Vonnegut’s Bluebeard, the Armenian massacre is ever-haunting. The protagonist in Cat’s Cradle is attempting to write a book about the Hiroshima atomic bombing.

HOMO
Walsh has asked Katsalidis back to work on a new high-roller hotel and casino on the MONA site, named Hotel Mona, or HOMO . HOMOsexuals don’t crop up in Vonnegut’s writing much, but HOMO sapiens certainly do. They’re a destructive species and shouldn’t be trusted.

Other odd stuff picked up along the way 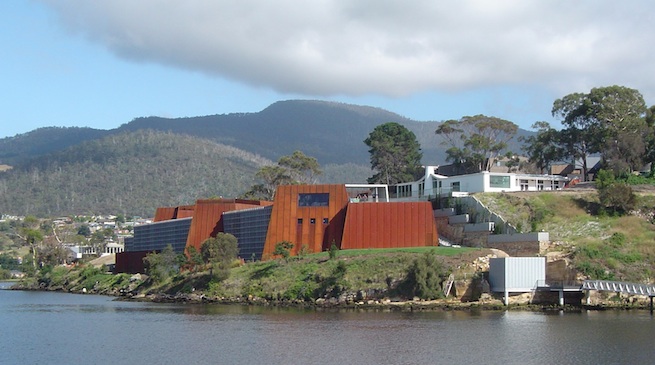 “Humans.. are very good at finding likenesses, at finding meaning, at finding order, where there is none.” David Walsh, ABC Stateline 2012

“What a coincidence! But that is all it is. One mustn’t take such things too seriously.” Vonnegut in Bluebeard, chapter 23