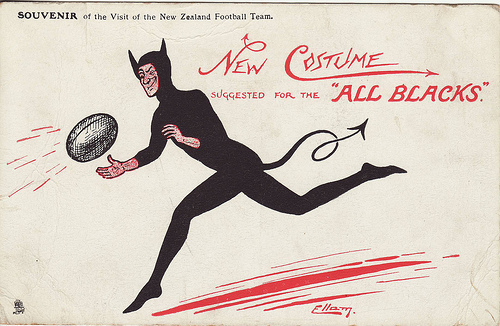 Ellison published a book in 1902, “The Art of Rugby Football”. I’ve known of this book for so long that I never stopped to consider its title, until I read a post about it by Jock Phillips suggesting that, “at its best rugby is truly an art form, where people running unusual lines and passing at speed make the game almost a form of ballet. I know this is derided as ‘razzle-dazzle’ by the purists; but that is the rugby which I love.”

From small beginnings, the use of the silver fern in company branding in New Zealand has recently exploded. In 1991 it got to the point that the NZRFU attempted to stop it with a trademark, but failed. The fern is out of the bag and belongs to everyone. It’s been overexposed like any national icon. It’s gotten to the point that the silver fern is a serious contender for a new national flag, one that differentiates it more from the Australian flag, which is the same flag with an extra star.

With the extraordinary powers of modern web search, it’s easy to find out more than the official histories have been able to dredge up. Once again, history has been simplified into something a little too neat and tidy.

In 1925, a controversy— erupted in the New Zealand media about the origins of the silver fern. Other sporting codes were wanting to use the silver fern. People were still alive who had been on the 1888 rugby tour so it wasn’t too hard for the Evening Post to find an opinion or two. Apparently— the silver fern was picked up almost by accident on a trip to the Wairarapa in the late 1880s.

“Mr. Hyland claims that it was on the occasion of a Wellington-Wairarapa Rugby match in 1886 or 1887 that the fern leaf was first adopted as a badge. The Wellington team was journeying to Wairarapa when a stop was made at Hayward’s Farm. “Miss Hayward gave one of our boys a ‘fern leaf,” said Mr. Hyland, “and asked him to wear it for luck. Before taking the field for the match the player pinned the fern leaf over the W.R.U. badge, and luck was with us! Tom Ellison and Davie Gage passed the remark that the fern leaf would make a better badge than the one we were wearing. In 1888 when the Native team was chosen to go to Australia and. England, the question of a suitable, monogram and badge cropped up. Tom Ellison, Davie Gage, and George Williams recommended the silver fern leaf, and this was adopted. The black uniform with silver fern leaf on the jersey was worn by the 1888 Native team, and the silver fern leaf was also worn as a hat badge. The Wellington Rugby representatives wore the black uniform years before, with a shield monogram and gold lettering.”

Ellison’s own team, the Poneke Football Club, one of three senior teams in Wellington, wore black and red in the 1880s, and were known as the “Reds”. Back to the 1925 article:

“Mr. Collis states that he recently had a conversation with George Wynyard (better known as “Sherry”), a member of the 1888 Native team, and an older brother of W. T. (“Tabby”) Wynyard, of Wellington. It was ascertained from George Wynyard that he was present at Wellington when Joe Warbrick, captain of the Native team, chose the all black jersey and silver fern leaf as the uniform of the team. George Wynyard also said that each member of the team, when in mufti, wore a black button relieved by two silver fern leaves, in the lapel of his coat. The all black jersey was selected as being most suitable in colour to withstand the wet and sloppy playing fields which were likely to be experienced in England.”

These remarks were verified by another member of the squad. But when the Native team arrived in England in late 1888, the Evening Post’s correspondent wasn’t very taken with— the new uniform.

About a minute after three o’clock the Welshmen entered the field, looking as fresh as paint in their white pants and scarlet jerseys, and a few minutes afterwards the New Zealanders appeared, and were accorded a very hearty reception. The Maoris were altogether heavier than their opponents, though their black uniform did not show up so well against the green sward as the more attractive dress of the Welshmen.”

40 years later the press still found it— a little sombre, but functional at least.

“The All Blacks get their name from the uniform they wear, for it is in truth all Black. The only touch of colour in the sombre uniform of New Zealand’s team is lent by the Silver Fern, which is worn on the breast of each member of the team. This uniform, when placed alongside the gayer habiliments of other teams, certainly looks dull, but it is extermely neat, and stands much more wear and tear than do other football uniforms.” 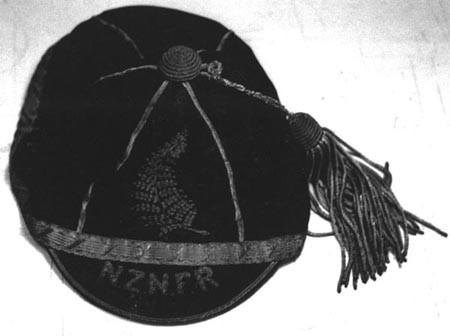 While their dark uniform was raising eyebrows in 1888, Ellison was picking up— on many game tactics that would later inform his book.

“[Ellison’s] trip with the Native team to England had enabled him to pick up an immense number of ideas and wrinkles, and, although there have been many most able football generals in this and other places in the colony, I doubt very much whether any of them ever understood the game in all its branches, both forward and back, as thoroughly as did Ellison. Moreover, as a forward, and especially as a try-getting one, he probably has never had a superior in the colony. For Warbrick’s team he secured more tries than any other member, with the exception of Keogh, who, playing at half-back, certainly had better opportunities to score. Ellison was quick to pick up an opposing team’s system, or lack of one, as the case may be and, by a counter movement or two, would rudely upset all their tactics.”

So maybe Ellison didn’t ‘invent’ the sliver fern, as some have said, but he did assist it into immortality. As Dr Ron Palenski, a Dunedin historian, says, “Without Ellison, you wouldn’t be talking about it.”

I think the rugby-playing genes were completely used up on Ellison. I am quite incapable of playing it. That honour goes to Ellison’s great great grandnephews, Tamati and Jacob Ellison – both recent or current All Blacks and doing a fine job of it.

After a brief but remarkable career in rugby, law, and politics, Thomas Ellison died— in 1904 at the age of 37.

“Private news received— here (says the Carterton Leader) states that Mr T. R. Ellison, well known in football circles, is dying in the Porirua Asylum. The sadness of such an end to a young man – he is about 36 years of age – is accentuated by the fact that Mrs Ellison is at present in an extremely delicate state of health. It is stated that over-study was the cause of the breakdown in Mr Ellison’s health.”

Ellison’s body was intercepted at the Porirua train station and taken for burial at his iwi’s marae at Otakou— , Otago. Within a month of his death, the Public Trustee was advertising the sale of his newly-built house in Day’s Bay. Construction finished after he was hospitalised.

Great piece PJ. So much I had no idea about. X