When Qatar was announced as host of the FIFA 2022 Soccer World Cup, what was I to do but see what they were proposing? It sounded scary at the outset – 12 or so air conditioned stadia working against midsummer temperatures floating around the mid Forties. The first five concepts are shown in the bid video above –

Then I heard that the airconditioning would be “carbon neutral”, and powered by solar panels. And then I heard that parts of the modular stadiums would be given away to other Asian countries.

So I went to the web:

- Büro Albert Speer & Partners (son of..) have designed five of the new stadia, with Norman Foster pitching in another larger one.

- Yes it will be solar-powered. Expensive maybe, but University of Phoenix stadium project architect Jack Boyle puts it into perspective: “First cost [initial expenditures] on creating all these alternative energy systems can be fairly high, so you just need to look at what your payback is going to be. But in Qatar, they may not be concerned about payback at all.”

- The 1400 sqm, 700kW solar field for the mini demonstration stadium (seating 500) was designed by Arup, and used Mirroxx solar panels. The FIFA report notes that this technology hasn’t yet been used on larger stadia.

- The “carbon neutral” claim assumes a year long time frame. The solar panels feeding power to the stadia would be diverted to supply the national grid when games aren’t on. Arup says that when they are on, the stadia will have to take energy from the grid. The air-conditioning is not quite solar-powered. 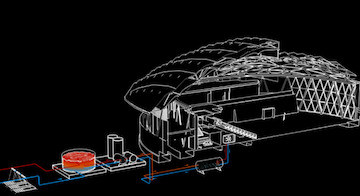 - The stadia will have retractable rooves – invisible in the videos. These appear to be in order to comply with FIFA regulations that might require that games be played in the open. Qatar intends to close the rooves on the days preceding the games to keep the pitches at a “reasonable” 27 degrees.

- each seat will have cooling outlets.

- solar PV panels will be used to chill water using absorption chillers. The water will then be used to cool a blanket of air over players and spectators.

- parts of some of the stadia will be disassembled and exported, along with the cooling technologies, to other arid countries. There is little detail that I can find on how this might be achieved. 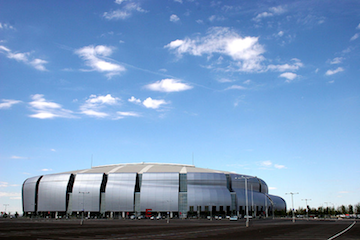 Looking a bit more closely at Mr Boyle’s stadium in Phoenix (design by Peter Eisenmann & HOK), it holds 72,200 seats maximum and the stadium website boasts in its Fun Facts section that the, “stadium air-conditioning system will generate 8,000 tons of cooling capacity, enough to cool 2,300 residential homes in the Phoenix area.” But don’t worry, the stadium has a Green Mission, the major initiative of which is to include 61 recycling bins in the stadium (that’s one per 1,183 people).

It looks like Qatar might be let off the hook, as FIFA are now considering the possibility of the Cup being held in Qatar’s Winter months. Anything to help out friends.

Spare a thought for stadium designers in the days of yore. The 1965 Harris County Domed Stadium, now more commonly known as the Houston Astrodome, had to be airconditioned. And it was complex, and the first big dome – the roof alone required two years of research. Engineering design problems included internal weather patterns, the acoustic problems from a 62,000 strong audience in a closed dome, growing grass, and smoke clouds (think Mad Men). The growing of grass ended up being rather difficult, so along came Monsanto with their Chemgrass substitute. It was soon after renamed Astroturf after the stadium.

Smoke testing at the dome

maybe they should have investigated the possibility of cooling the air using underground labyrinths or basements, as in the Osaka Municipal Gym:

just returned from OS with loads of banal photos how do I upload them? did you miss me? i see no-one else is reading your site except me, must be disappointing.