The planning department abdicated responsibility for determining where the zones go to local government, though the minister retained final say. By the time the government slipped into caretaker mode recently, Mr Guy had approved a good number of the zoning maps lodged by councils. Many of the successful councils happened to be in the south and east, where councils opted for blanket use of the Neighbourhood Residential Zone, with tiny dollops of GRZ and RGZ around busy roads. 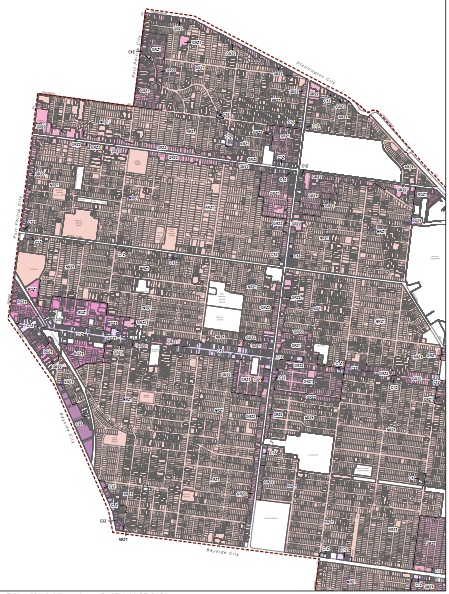 North West part of Glen Eira’s zoning map (the beige-salmon shaded blanket is NRZ. The light pink areas are GRZ, the hot pink ones are RGZ, and the mauve areas are zoned commercial). DPCD

In July I began my zigzagging foray meander through Plan Melbourne by zooming in on some Residential Growth Zones, just to see what they were. I randomly chose an area in Glen Eira near the Elsternwick Station (middle left of the map above). Glen Eira was the first council to have its submission approved and gazetted, back in August 2013, even before the release of Plan Melbourne. As with all the leafy ‘burbs, NRZ dominates. The Age calculated that 93% of residential land is Neighbourhood Residential Zone, 5% GRZ, and 2% is RGZ.

Zoning on the left, NC overlay on the right

The RGZ is meant to, “provide housing at increased densities in buildings up to and including four storey buildings”. What’s disturbing is that most of this RGZ area falls within Neighbourhood Character Overlay No. 4. One of this area’s Neighbourhood Character Objectives is, “to encourage retention of older dwellings that contribute to the valued character of the area.” At the top of the overlay’s schedule it states:

New dwellings will respect the key characteristics of the streetscape, comprising of:
- Established garden settings with substantial planting.
- A single storey scale of buildings, with upper levels well recessed from the front façade.
- [etc]

There appears to be some conflict between the zone and the overlay. Which one wins? In general, “if an overlay is shown on the planning scheme map, the provisions of the overlay apply in addition to the provisions of the zone.” They would both win! But this overlay explicitly modifies the zone requirements to insist on scale, heights and site layouts that respect neighbourhod character. In other words, the zone permits you to build up to four storeys, as long as you only build up to two storeys with a hip roof, and as long as it only looks like a one storey building from the street. So much for certainty.

If this is a Claytons RGZ (the zone you have when you’re not having a zone), how many others are there? I looked at the adjacent RGZ just across Glen Huntly Road and found that it coincided beautifully with Heritage Overlay 72, “Elsternwick Estate and environs”. Most of the properties in this RGZ are significant places, as identified in a 2003 draft heritage report. Most of the rest are contributory places. Reading this report and the heritage clause of the Glen Eira planning scheme, it seems very unlikely that a developer would be permitted to demolish a letter box, much less build a four storey apartment block.

Possibly these are just isolated aberrations that somehow slipped through all the checks. I decided to look at a different, distant council. The City of Yarra’s zoning plans were not approved by the Minister and the whole municipality was “neutrally converted” to GRZ on July 1st. I only examined the Northern area from Fitzroy through to North Carlton. Once again, it’s hard to find many RGZ properties that could actually be developed. There are St Brigid’s Church, School and Presbytery on Alexandra Parade, which would all be sorely missed should apartments land atop them. The RGZ picks up properties which have already been developed, others in heritage overlays, and St John’s Primary School. There is a large strip of RGZ down on Alexandra Parade close to Hoddle Street… the very same properties that the state government is forcibly buying to build a temporary road for its elephantine East West Link project.

Some councils with insufficient RGZ in their proposals were sent back to the drawing board without approval. Other with approved schemes were told to allocate more area to Residential Growth Zones as a “Stage 2”. These latter councils include Boroondara, Bayside, and Darebin. The Bayside request was withdrawn during the current Liberal election campaign (!). The most perplexing case I’ve found is Boroondara. The council’s zoning recommendations were approved on a “fast-track” by Minister Guy in June, despite warnings from his own Residential Zones Standing Advisory Committee (RZSAC). Back in March the planning department asked Boroondara to increase its RGZ from 0.8% to 2.5% of residential area. Council did so but in May the elected councillors unanimously voted down these recommendations at an RZSAC hearing, in response to community outrage . The advisory committee later rejected the proposed zones too and in September Minister Guy issued this press release:

“Residents in Boroondara will have greater certainty about where development should occur, with an independent advisory committee ruling out higher density zoning in areas proposed by the council… All councils are expected to adopt a sensible approach to the residential zones. Boroondara will have to undertake further strategic work to achieve this, and will have the General Residential Zone put in place instead of the higher density development that council proposed.” ( link )

Talk about everyone having it both ways. Guy “locked up” all the council-proposed RGZ properties that the council didn’t support and that he had requested, by zoning them all GRZ. Some poor council planners are between a rock and a hard place.

Boroondara is a very special place. In 2002, locals got organised to protest against development proposals for Camberwell Station. Quite a few groups fired up around that time, among them the Boroondara residents Action Group and the Malvern East Group. Boronodara-based Planning Backlash is a coalition of many such groups. In opposition, shadow Planning Minister Guy showed support for the groups’ demands to return power to councils and to preserve the character of their suburbs. He addressed these issues in Plan Melbourne but disagreed with Planning Backlash’s solution for reigning in the Urban Growth Boundary, preserving liveability and restoring affordability to the suburbs. They want to reduce immigration, or “build a new city elsewhere eg develope [sic] Portland”.

So where does that leave us? Boroondara, Glen Eira, Bayside and other municipalities in that leafy south eastern belt are not going to meet any targets requested of them by state government. The RGZ’s across Melbourne are not what they appear to be. Many have been deliberately positioned where they can’t work, at least without a big fight and a trip to VCAT. There is no provision for apartment blocks over the often mandatory maximum height of 13.5m. The number of dwellings in suburban municipalities will grow, but not enough to cater to upcoming demand within them for affordable and diverse housing options. Picking up some of the slack will be urban renewal zones (ie Fisherman’s Bend), and growth areas (ie woop woop).

“It was submitted that a reduction in the development of apartments; reduced new housing supply opportunities due to the inappropriate application of new zones; and increasing greenfield production costs are expected to create an ongoing structural shortage of new housing to meet growing demand.” from RZSAC’s Stage one Overarching Issues report