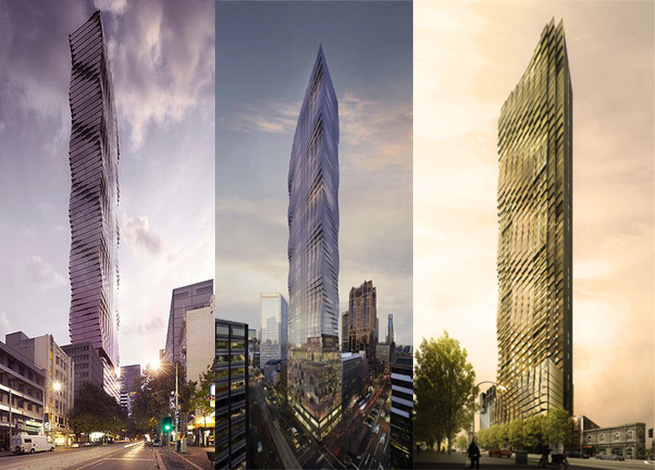 “This is where Melbourne comes of age” Callum Fraser, Tower Melbourne architect

Elenberg Fraser’s elegant Tower Melbourne proposed for Bourke Street has triggered a couple of opinion page articles in The Age that quickly skew off to talk about other things – public housing towers and suburban sprawl, but what about the city itself?

The tower takes advantage of a rule stating that any development over 25,000 square metres be referred to the state planning minister for approval, not the local council. These developments are are deemed ‘major’, therefore of state significance, no matter what the site area or intended use. It is a crude tool, meaning that there end up being two competing planning strategies for the same area. One is concerned with the macro – jobs and metropolitan density, the other micro – pleasant environments and a consistency of skyline.

The Tower Melbourne site is only 923 sqm, so the tower uses up as much as it can of it. Podiums and setbacks went out with Cona coffee. These devices gave some consideration to the surrounds, especially things like sun and wind. This tower has two shear elevations right on the street, 71 storeys high. Eureka Tower is only 18 storeys higher. Architects accept this now more than they once would have. I remember seeing a late ’70s cartoon by Barry Marshall (DCM) lampooning the design of IM Pei’s Collins Place. It suggested that the tall towers, set at 45 degrees, would cause people to have to walk at a 45 degree lean at a nearby intersection, due to the wind.

A few years ago I sat a Lyons Architecture’s presentation to the AIA jury, they were seeking an urban design award for their BHP tower at the corner of Lonsdale and Russell Streets. I was interested to hear the jury’s questions about the now windblown environment at street level. The council had even had to install wind breaks across the street so that people could sit outside the greek cafes without being blown away. There were no questions about this. Perhaps this was because the jury realised that the volume of the buildings on tight sites is determined by the developer and the government, not the architect. What is the architect to do in such a situation other than to play along, or resign.

I had thought that this was the case with these new towers. That they are the inevitable result of a scarcity of larger sites, and the removal of height limits in the ’90s. But the AFR’s interview [ PDF ] with Shane Rothe set me straight. According to this, it’s an “architect-driven” typology that developers happily came on board with because the small sites are cheap. Advances in structural concrete have also allowed these heights to be reached on small footprints. These new towers are proving popular with Chinese investors.

The towers of the ’70s and ’80s were typically set back from streets with podiums or plazas. They had rear lanes for vehicle entrances. Nowadays the towers are more likely to be residential. They use all of a small site, rather than some of a large site.

Due to the planning minister’s state wide considerations, the urban design concerns relating to these skinny podium-free towers count for little. Other justifications like jobs and density gain prominence. Robert Nelson suggests in his article that if you’re against density, you are automatically for suburban sprawl. “Every time an inner-city development is foiled because of the visceral attachment of residents to low density, Melbourne is forced outward.” Sprawl is more complicated than this, but that’s fodder for another article. This point of view, commonly echoed by developers in planning applications, suggests that all inner-city intensification is a good thing, as it will further activate it, and put a belt on the periphery.

Commentators such as Richard Florida and Edward T. McMahon question this assumption that density is always good, even if it’s a high-rise. McMahon thinks that “Buck Rogers” skylines can be thrilling, but down on the street, they are “often dreadful”.

The problem is that many developers and urban planners have decided that density requires high rises: the taller, the better. To oppose a high-rise building is to run the risk of being labeled a NIMBY, a dumb growth advocate, a Luddite — or worse… Today, density is being pursued as an end in itself, rather than as one means to building better cities. Edward T. McMahon ( citiwire )

McMahon lists a string of cities where high density has been achieved without resorting to towers. A City of Melbourne report ( PDF ) also lists cities like Barcelona and Vancouver, and argues that six to eight storeys are more than enough to achieve, “high density compact cities of the future.” They also note that in these buildings, you can open the windows. Nice touch.

The counter argument, which I’ve read and managed to lose, would seize on that word “future”… Sure we could get a high density city at eight storeys, but that’s a long way off, and complicated by multiple landowners and heritage registered buildings. We can put up a smaller number of tall towers and address the issue quickly.

This does beg the question, what happens to all the neighbours of these towers. Will they run into trouble when they want to rebuild? Fraser believes that good design will get us around that one – everyone can have a view and light if it’s done right. But it isn’t always done right, as recent cases in Southbank and the city illustrate. A tower in Wills Street was recently rejected at VCAT because it would steal daylight from the adjacent residential tower. This is despite the proposed tower ‘sucking in’ in the middle to give a bit of space to the neighbours.

This surge of development in Melbourne’s CBD is largely occurring outside the local planning strategy. We have two planning strategies in use, with quite different aims, and they clash. One looks to Vancouver and Vienna, the other to Shanghai. We are starting to see a different sort of cityscape emerging. A city with many tall and blank concrete boundary walls that you won’t see in the renders.

Anyway, the developers must be pretty confident as they have apparently pre-sold Tower Melbourne. The planning minister is rumoured to be about to approve it, but we’ll have to wait and see. Once a project is “brought in” by the planning minister, transparency disappears. Once he decides one way or the other, there is no way to appeal at VCAT. You’d have better luck enlisting Miley Cyrus to help.

If the Minister wants to play God, there should be far more comprehensive public explanations of his interventions. The City of Melbourne has considerable planning expertise yet no power to determine any application greater than 25,000 square metres. This should be changed. Stephen Mayne, 2012 ( PDF LINK )

The minister’s response to complaints isn’t very illuminating. Last month he suggested to News Ltd that people whinging about over-development should move to Adelaide. “Growth in the CBD is where Melburnians expect it and where they want it and it is adding to what is the best CBD for work or play anywhere in Australia.”

There are currently 13,000 apartments either under construction or awaiting approval in central Melbourne. Some of these are listed below.

Posted by Peter on 29.10.12 in buildings and urban design

the towers look shaky already,lucky there is no
earthquake…not a good design…looks unstable
and is in fact an eyesore…if not scary effect of about to fall or slip down effect..sorry to say…
consider wraps of curtain-style facade so it’s neat
yet soft vertically to achive style…elegance…
good luck…if you need help please feel free to email to me…

And they get taller: 108 storeys tall