The Carlton United Brewery development site on Swanston Street was “taken in” by Justin Madden’s planning department over a decade ago, as the proposed integrated development was deemed of state significance. This made it possible for the ministry to override the council on many fronts, to hurry things along… but then we had the GFC. And then the site was sold off in profitable chunks. Despite the fragmentation, delays, and multiple changes of government, the site still has its own zone (CDZ2) and the state government planning department still rules the roost.

Unfortunately for the public, the fallen wall sat at the very edge of private land on a site for which the planning minister was the “responsible authority”. The hoarding hung off the wall and over the Swanston Street footpath, which was council’s domain. 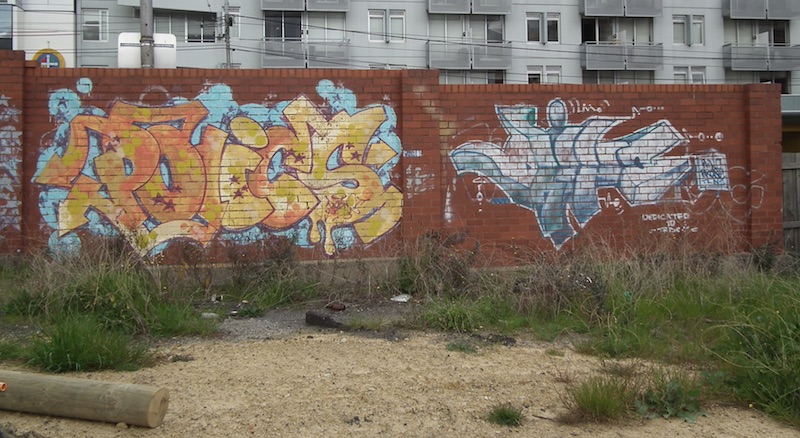 The CDZ2 zone covering the CUB site and clause 52.05 of the planning scheme required a planning permit for a sign like the one installed, to be sought from the Responsible Authority, in this case the Planning department. This didn’t happened. Next it needed a building permit, and that didn’t happen either. The hoarding stood for over a year, in a heavily trafficked part of the city, and no one objected.

Twelve days after the wall fell, the City of Melbourne issued a press release (since deleted from its website but available at the trusty Internet archive ).

“…we can confirm that the City of Melbourne has not issued a permit for the structure attached to the wall. There are four relevant legislative frameworks – Planning, Building, Occupational Health and Safety and Local Laws. There are intricacies in the way in which these interconnect and overlap. These complexities are likely to be considered by the investigating authorities. In general terms, the City of Melbourne oversees the interface between building sites and public space. With regard to the wall collapse in Swanston Street, it should be noted that the wall was on private property.”

These “complexities” were never addressed in any investigation, at least not in any way made public.

The statement from the council left even the 4th estate confused. The ABC’s resulting article stated that the wall didn’t need a permit, which led to a complaint and revisions to the article three weeks later. In explanation to the complainant, the ABC wrote,

“[the reporter asked repeatedly over a number of days] whether or not a council permit was required and, if so, whether one was issued. She was told by council officers that the situation regarding permits was confused as there were a number of different authorities involved.”

More than a week after the collapse the ABC was unable to get a straight answer from the council on whether or not a building permit was required for the hoarding. How would it have been for a tradie ringing to enquire?

Though the body of the ABC’s article changed, the title didn’t.

On May 7th, the City of Melbourne wrote in response to a question from the public at a Future Melbourne meeting three weeks earlier. The person asked whether the high white fence which had just replaced the collapsed wall had a building permit, as it was over the 2.4m height limit. Good question. Answer:

The temporary fence/hoarding is located on private property. In this instance a permit is not required under the Activities Local Law 2009. The structure is also exempt from a building permit under the Building Regulations 2006 .

No further explanation was supplied. The new “temporary fence” stood for more than six year until its recent demolition for the construction of the Scape apartment building. 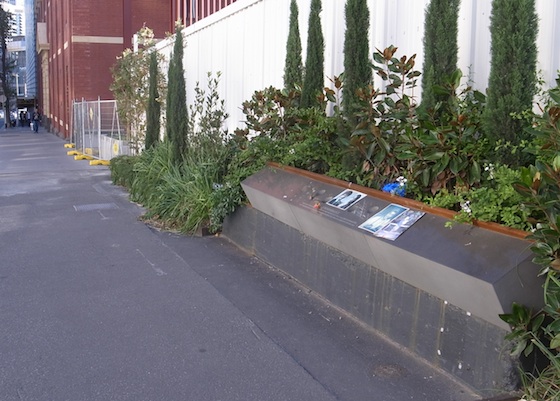 At the Magistrate’s Court in 2015, in relation to the Swanston Square hoarding, the installer’s lawyers quoted from that same schedule. The Magistrate, said that these exemptions did not apply. The hoarding was not intended to be temporary, nor was it used for “display purposes”. It was permanent and it was a sign.

Following the logic of this literal interpretation of the schedule, the hoarding may have been exempt if it had been part of a display home, or if it hadn’t been daubed with “Swanston Square”. Could this be one reason the current wall was bright white, with not a logo to be seen? 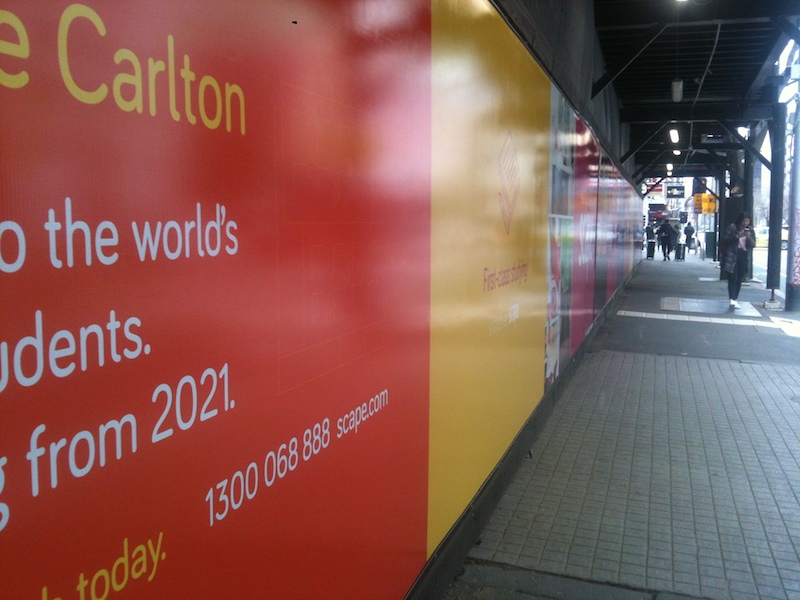 The current situation at the site is this: there’s an overhead gantry along the length of it, flanked by an advertising hoarding. I’ve dredged the internet and found a ministerial planning permit for the signage dated July, but no trace (yet) of a permit for the gantry. Maybe they’re exempt… or something. I could pay $50 to the council to ask them to rummage for something, but that exceeds this article’s budget by several thousand percent.

In April 2013 the Planning Minister, “issued a statement on the wall’s collapse, in which he said it was the developer’s responsibility to gain permits – with enforcement action the job of Melbourne City Council.” The council said it was up to the minister to issue the required planning permit for a project that had been taken in. ( The Age 22.05.13 )

After that little skirmish, which capitalised on poor public understanding of the difference between planning and building permits, things fell quiet.

The Age commented that, “the complexity of the task before the Coroner is daunting: [the Planning Minister] Mr Guy has responsibility for big-picture planning of the CUB site, while the council has authority over building and the interface of building with the public domain.” Not to mention the roles of the VBA and WorkSafe.

Daunting jurisdictional “complexities” didn’t rate a mention in the State Coroner’s findings despite them being central to the case. The State Coroner Sara Hinchey stood down two months after her findings were released. Investigations by The Age led it to describe the office during her tenure as an “increasingly dysfunctional and, at times, hostile, workplace.”

A year after the wall’s collapse the then Planning Minister Matthew Guy was asked in parliament how his “state-wide audit of free-standing structures” was progressing. Guy prepended his reply with a helpful reminder that the Swanston Street wall was the responsibility of council. Responsibility for his own state-wide audit had been delegated to the Building Commission (now VBA), who sent letters to councils and builders urging them to check that all their structures were safe, and to fix them if they weren’t. In no way was this an “audit”.

As an indicator of success, Guy thought the audit may have influenced the City of Darebin’s decision to pull down a a wall on St George’s Rd, surrounding the former Little Sisters for the Poor convent on three sides. So I had a look at it. The solid red brick wall was at least a kilometre long, built in 1912 to a design by church architects Kempson and Connolly. It still has a Victorian heritage registration and is on the now-defunct Register of National Estate. It was demolished in haste a fortnight after the Swanston Street collapse, much to the shock of locals . The area’s revised Urban Development Framework was released several months later, and showed the Little Sisters site tagged “strategic” with the potential for “medium-rise residential”. Sometimes the stars align.

The Liberals lost government in 2014. The new Labor Planning Minister referred to the wall collapse while introducing the Section 16 revisions in 2015, and squarely laid fault at the feet of the city’s building practitioners.

“We have seen, following the investigation into tragic deaths from the wall collapse in Swanston Street, that the current system does not provide sufficient incentives for people who control the carrying out of building work to effectively oversee compliance with regulatory requirements.” 2nd Parliamentary Reading

When he says “incentive” I say “negative reinforcement.” That’s threatening people to deter them from not performing a task – a task which in this case can be cumbersome verging on the kafkaesque. Perhaps it would be simpler to just make it easier to perform the task.

In April 2016, the corner of the two-storey Royal Park Hotel in North Melbourne collapsed onto adjacent public footpaths during a demolition stop-work. Bricks and asbestos particles sprayed everywhere. A woman had passed the wall pushing a stroller 30 seconds before the collapse.

The brick facade had been identified by the council as a concern for several years, but the building sat empty and neglected. Google Street View shows the cracking as far back as 2007. 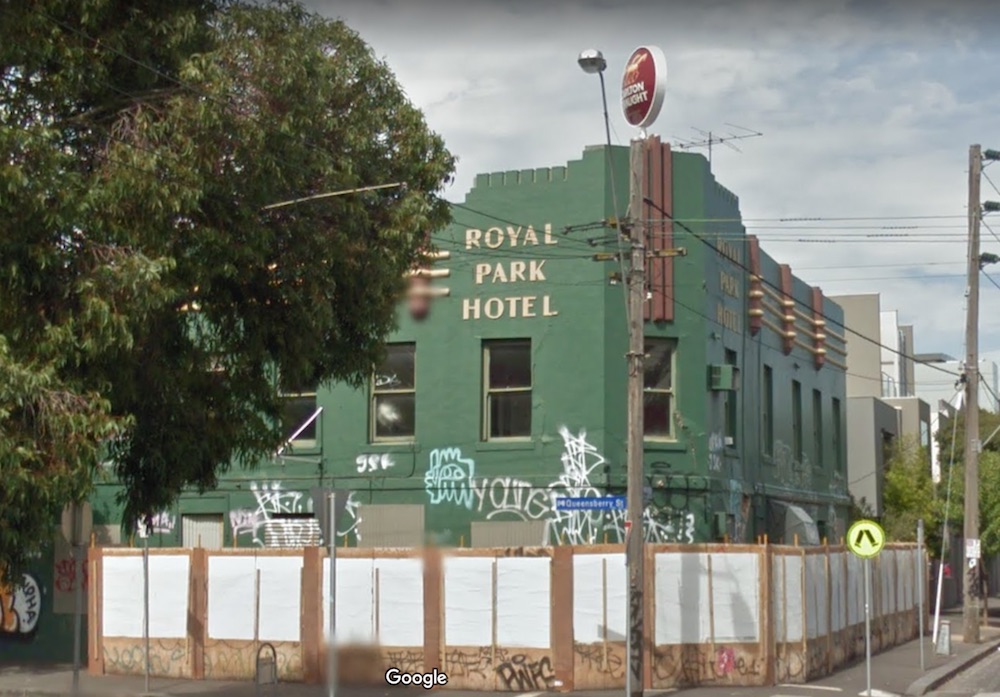 Worksafe promised an investigation, the VBA sent their Proactive Inspection team along, the council stayed fairly quiet, and the CMFEU construction union berated everyone. And that was it. A police acquaintance told me that a police investigation would have been unlikely for an incident like this as no one died.

A three storey construction scaffold fell onto another North Melbourne footpath in 2017, registering barely any coverage in the media. ( CFMEU facebook post ) Worksafe responded by visiting other construction sites to inspect scaffolding.

And so on. Here are a few other recent collapses onto public roads and paths in Victoria, collected on my travels.

Next in this series: Demolition, dirt and a sad tree