Late last week I received a batch of photographs taken in 2010 and 2011. The sender wishes to remain anonymous. This was something of a relief as I had been scouring the web looking for high resolution images taken of the rear of the wall – a mesmerising task. So thanks, whoever you are. Thanks also to the two others who have previously provided privately-held images of the wall. 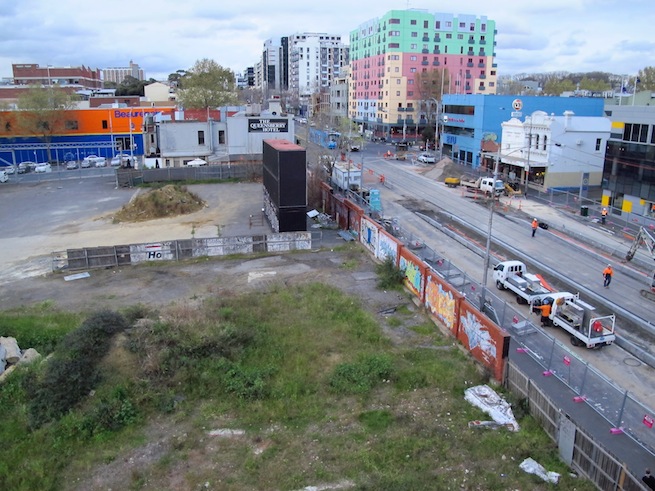 This photo, from a window high in the old maltstore, shows the September 2011 installation of super stops adjacent to the wall.

After staring at these new photos for a while, I wondered if the southern part of the wall was leaning a bit. The photographer remembers, “a slight outward lean of the wall at the time.” So I extended some vertical lines to vanishing point from several nearby buildings to see if I was right. 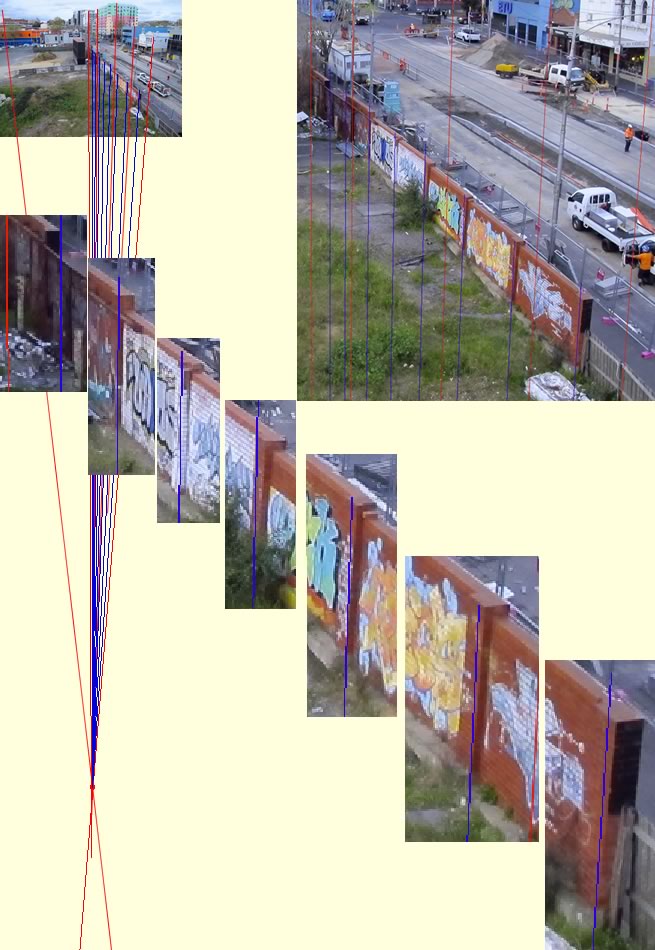 That showed the South end of the wall was on a lean, but I wasn’t convinced. As the adjacent lamp post is shown on a similar apparent lean I thought the lens was interfering. So I started again and used Photoshop’s new adaptive wide angle lens filter to horizontally correct the horizon, then vertically straighten the lamp post and the wall beneath it. 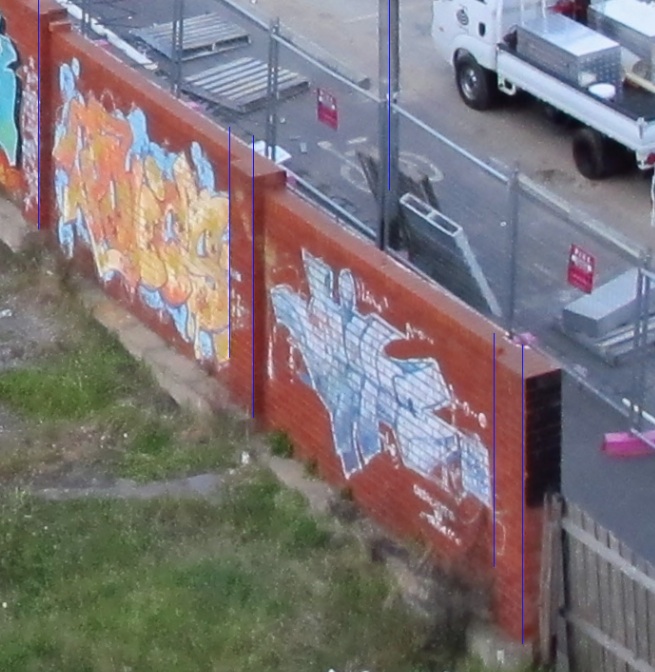 Having manipulated the perspective so that the lamp post was true, the Southernmost pilaster is still showing a bit of a twist or lean, of about 25mm. This probably isn’t surprising given the lack of restraint, brick expansion, and the three-sided exposure this part of the wall was receiving.

The following photos were all taken in late 2010. 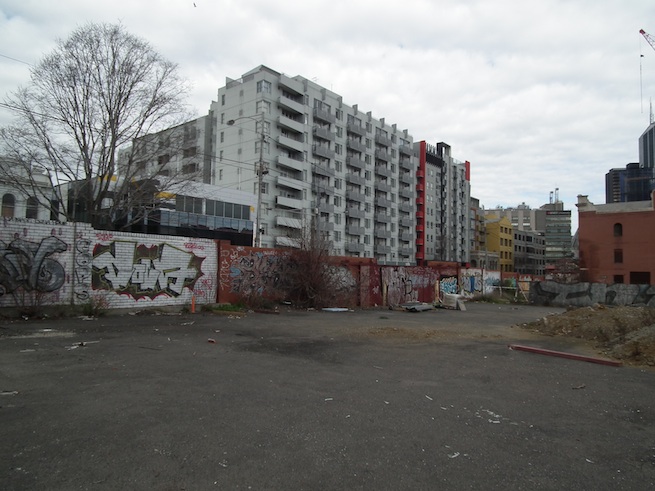 The Northern end of the wall, demolished on the night of March 28th. 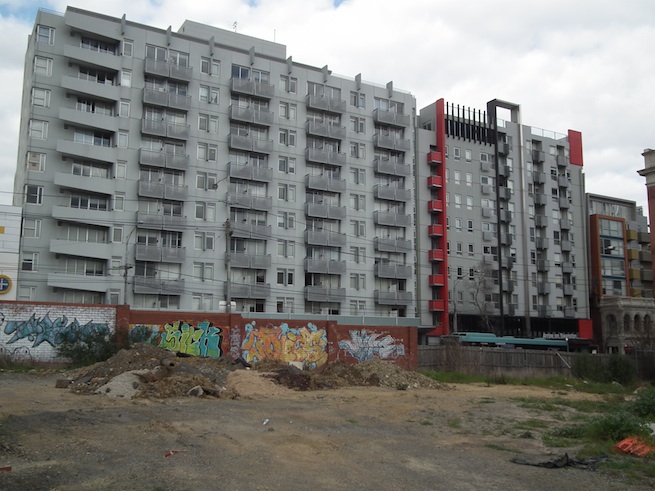 The Southern half, after some site preparation work (removal of asphalt). 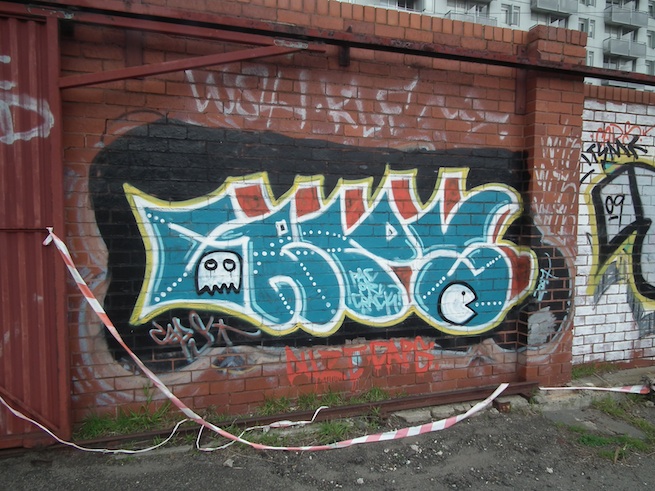 The brick panel next to the gate 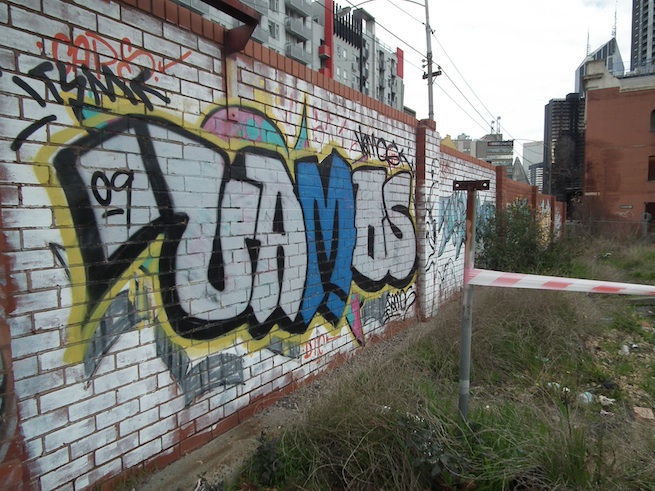 The next panel down, the northern end of the collapse. The gate bracket may have prevented further collapse, but it also caused local cracking. This panel was over-sprayed with new graffiti in early 2013. 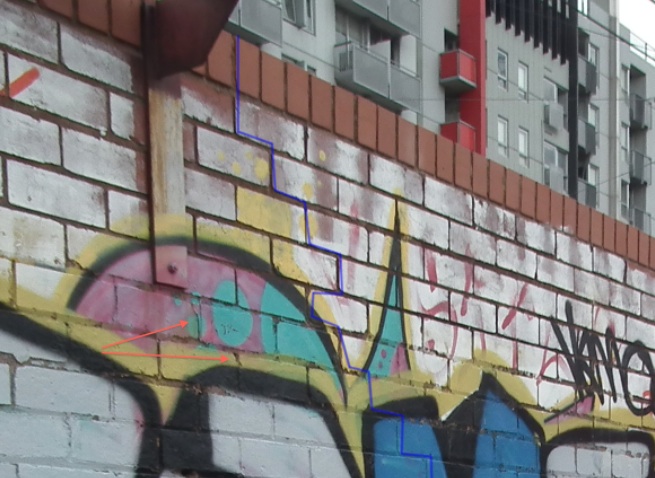 A zoom, showing cracks under the gate bracket (red arrows), and the extent of the wall collapse (blue zig-zagged line). 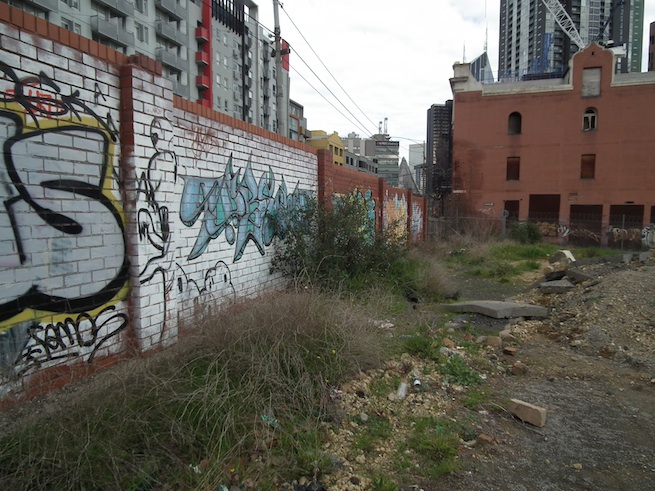 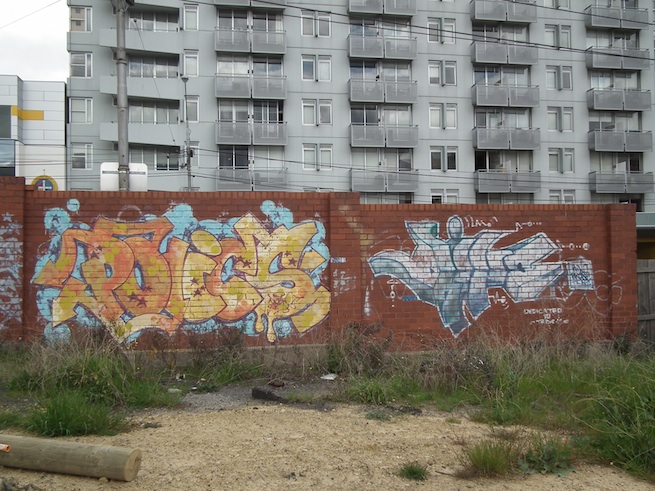 Far Southern panels, note the capping brick that’s fallen away on the left. 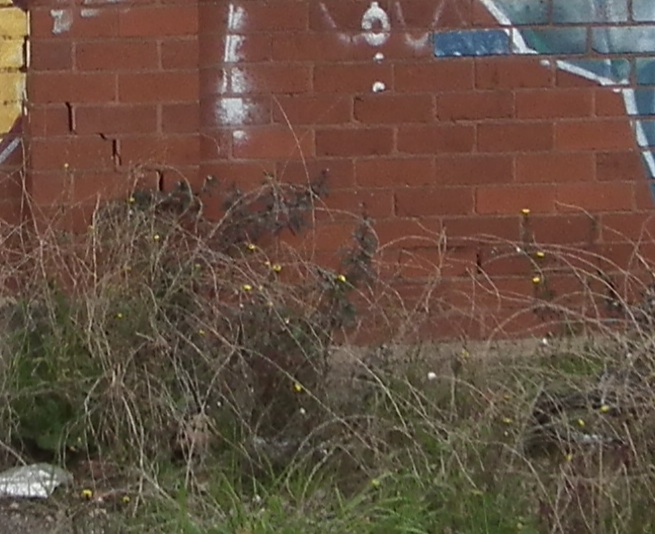 Zoom of previous pic, to 100%. The cracks to the pilaster and end panel mentioned in the Herald Sub existed in 2010. 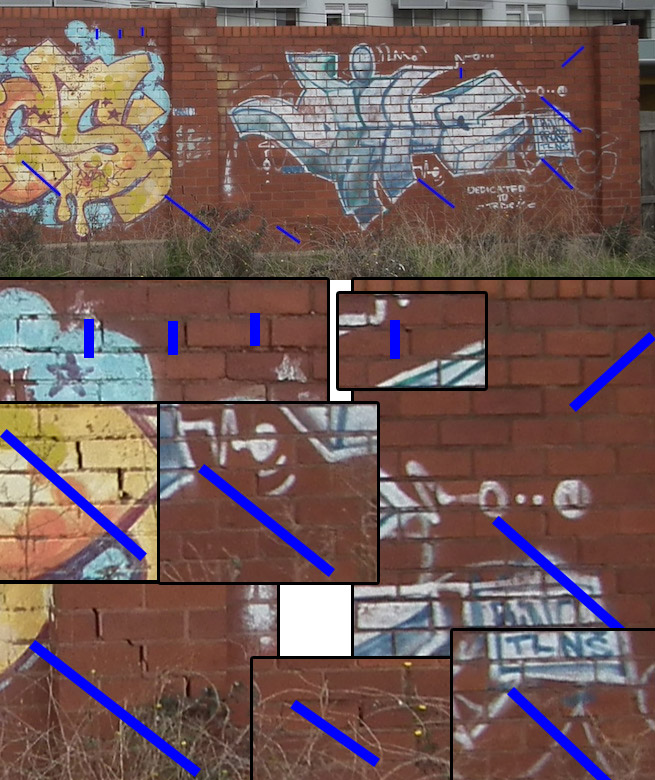 The vertical columns are pilasters, not piers as I’ve previously described them. The U.S. Brick Industry Association defines a pilaster as, “simply an increase in effectiveness of a wall at a specific location”. Its effectiveness extends only six times the thickness of the wall (about 1.4m in this case), measured from the edge of the pilaster. The distance between each pilaster is about 4.4m, which would mean that the pilaster thickenings were not providing any benefit to a 1.6m span at the centre of each panel.

A series of proposals for the site never came to fruition, being stymied by the economic jitters of October 1989 and October 2008. Things came close to happening in 2008, when the asphalting behind the wall was scraped up, and an archaeological dig took place.

The Capital City Zone 2 C126 amendment was issued that same year by the then Minister for Planning, Justin Madden. Apart from exempting the development from public notice and review (in the interests of speeding things up), it stated that a planning permit was not required for, “site preparation and retention works including security fencing, site offices, bulk excavation and piling, footings, ground beams and ground slabs”.

The site was the first major development in town to be “taken in” by the Minister for Planning, in 1989. After several permit applications in the 1990s and 2000s, in May 2012 the current minister issued another permit with conditions for Building 5, then going with the name “Portrait”.

The permit required the lodgement of a Construction Management Plan explaining how the developers would go about demolition and construction in a safe and considerate way.

“Prior to the commencement of the development, including demolition or bulk excavation, a detailed construction and demolition management plan must be submitted to and be approved by the Responsible Authority.”

Five months later in October, an updated planning permit was issued for the same development, in response to a new application by ARM Architecture on 5th June. Oddly, the revised requirement for a demolition management plan did not need to be lodged before demolition took place. Perhaps this had been deemed to have taken place already, or that it was too minor that it didn’t require a permit?

“Prior to the commencement of the development, excluding demolition or bulk excavation, a detailed construction and demolition management plan must be submitted to and be approved by the Responsible Authority.”

Grocon completed a Construction Management Plan for Stage 1, which is behind the maltstore and doesn’t include the street frontage.

The only hoarding application I could find was lodged in April 2003, at the City of Melbourne. It was withdrawn four days later. It was for the “erection of advertising on the existing hoarding.” No further details are available online.

The council released a carefully-worded statement on Tuesday. Here’s an excerpt:

“We can confirm that the City of Melbourne has not issued a permit for the structure attached to the wall… There are four relevant legislative frameworks – Planning, Building, Occupational Health and Safety and Local Laws. There are intricacies in the way in which these interconnect and overlap. These complexities are likely to be considered by the investigating authorities.”

The council doesn’t say if the billboard should have required their permission, only that they didn’t issue a permit. They go on to underline that they aren’t responsible for the site, noting that the building site was private property, and that the Minister for Planning issued the planning permit. The Minister has previously said he hasn’t ever issued a permit for a hoarding either. This is a bit of a worry – the Minister is responsible for building sites all over the CBD which may have similarly confused boundary jurisdictions.

Signage normally falls under regulation 52.05 of the Melbourne Planning Scheme. Clause 52.05-4 mentions the sorts of signs for which permits aren’t required.

“A sign with an advertisement area not exceeding 2 square metres concerning construction work on the land. Only one sign may be displayed, it must not be an animated or internally-illuminated sign and it must be removed when the work is completed.”

There is other advice from the City of Melbourne saying that two advertising signs are permitted, each 2m by 1.2m. Hoardings are to be between 1.8m and 2.4m high. As the sign was approximately 3.2m high and 200 square metres in area, with another sign of about 29 square metres on the stacked containers, this one definitely required a permit from someone. As part of an application, the owner has to lodge details of the, “height, width, depth of the total sign structure including method of support and any associated structures.”

Clause 52.05 does refer to safety, but only to say that a sign shouldn’t distract or slow drivers. This perhaps doesn’t fulfil one of the clause’s purposes: “To ensure that signs do not cause loss of amenity or adversely affect the natural or built environment or the safety, appearance or efficiency of a road.”

A summary of sorts

I’ve read here and there that I’ve been overdoing it a bit, that sometimes walls just fall. I have overdone it, at some cost, but partly out of fear that no one else would and the issue would quickly fall out of the news. So I’m glad that the mainstream media picked out several items from the first post. Depending on where you read, different final conclusions have been made already. The wall fell because of the strong gust / the hoarding / the cracks. It was a combination of all three, and many more reasons that have their roots in events decades ago. This wall did not “just fall”.

The brick wall was an inbetweener. Not quite of the site and not quite of the street, it became invisible to owners and authorities. It was nobody’s business, a forgotten relic poorly built and not maintained. But it was a useful relic for keeping the curious out of the CUB site, for their own safety. Not that it stopped them – most of the useful photos of the wall were taken by urban explorers and graffiti enthusiasts.

The wall’s context has changed out of recognition since the closure of the brewery in 1987. Firstly Elders demolished the brewery behind it in 1989, exposing it to Westerlies it had never had to deal with before. The buildings that abutted the wall at its Southern end were also pulled down.

In more recent times, a large apartment building was built directly across the street, tram works and a super stop installation have taken place, and the bitumen area immediately behind the wall was dug up then used as a tip for mountains of spoil. Then it was all removed. There was also a decade long drought and a number of half decent earth tremors. That’s a lot to deal with for a wall that had been ready to fall for quite a few years.

Competing and overlapping jurisdictions have led to confusion about who was meant to be doing what and when. There are quite a few aspects that any inquiry will have to cover. Rather than having multiple internal inquiries, some held by bodies that may be partially liable, a better way would be to have one independent public inquiry. It is the general public who have been let down here, so they should be able to have faith in the inquiry and know what is going on during it.

( This post is posted as a draft on Thursday night, and revised and completed on Sunday )