Having worked in the fringes of the planning industry since the early 1990s, especially dealing with big projects in the central city, I now have to concede that all that I thought was good about planning in the city area has now basically gone.

Podiums are out of fashion, and wind effects, not to mention tower setbacks from each other, and cumulative shadowing of streets (when the tower is on the north side anyway) seem not to be a concern. Tall skinny towers on small sites exacerbate all these issues. My take is more political than architectural, but both are in the mix for driving the changes that will soon make parts of our city very dense indeed, in a way quite the opposite of the vision set down in the 1980s, and still, supposedly, in force. Amongst many other things that was a vision that saw the comfort of the pedestrian as primary, and so encouraged towers setback above people-scaled (and heritage-building scaled) podiums, which also avoided the notorious wind effects towers in Melbourne create, and spaced enough to ensure some sunlight made it to streets level. 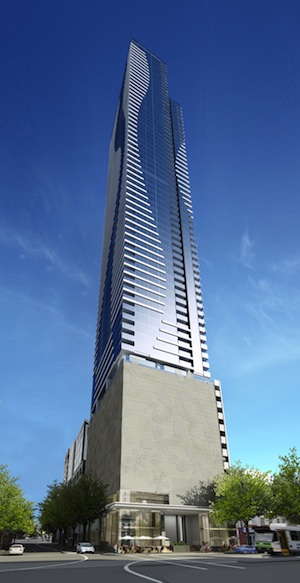 I was shocked when images started appearing of designs of tall no-setback towers, because I knew that the City of Melbourne Urban Design Guidelines stated that a podium should be included – but I realised that since 1999, with the introduction of new-format ‘performance-based’ Planning Schemes, it’s not mandatory, it’s ‘policy’. The same thing happened to plot-ratio, the tool that most cities use to encourage or force good design and control densities – it was made into policy, and applied only per-block rather than per-site, and now it’s simply ignored.

The other big change in the last 10 years was that most of these towers, suddenly it seemed to me, were so tall they were over 25,000 sqm, and so were dealt with by the Department of Planning, not the City of Melbourne. The Department has its own culture, and under Justin Madden started allowing no-setback towers from the early 2000s, without a peep from the City of Melbourne, or at least noises that anyone could hear. The City of Melbourne didn’t help by starting a trend – issuing a permit in 2001 for the silly apartments-on-the-boundary on Wills Street that is now causing problems for next door. The Department at the same time permitted the BHP Billiton tower with no setback on Lonsdale Street, and Elenberg Fraser’s Liberty Tower on Spencer & Collins, with no podium to speak of and no setback on Collins Street. Looking back, they were the first relatively minor breaches of the guidelines.

Then came the towers on ever smaller blocks – perhaps this was pushed by developers, or by architects as developers, or by architects using new technologies to assist developers to maximise site potential. They were also assisted by a lack of concern from the Department who apparently had only minimal requirements, and soon developed a culture of more and taller is better, perhaps mixed with an admiration for all the glassy wibbly-wobbly designs (which I quite like actually, assuming they turn out as glamorous as the renderings) and didn’t see any problems with wind effects, street overshadowing, or tower spacing. They probably started off with a vague notion that towers in the central city should get some slack because it’s the best place for them, and will slow urban sprawl (though they obviously aren’t), but certainly under Mr Guy’s leadership, the intention is now that they will take the pressure off the leafy middle suburbs (where now a 3 or 4 storey height limit will soon apply over most of those leafy streets). 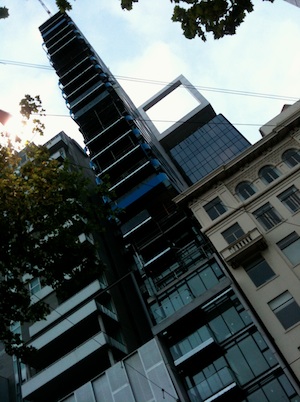 The Department has its own culture because they do everything without scrutiny. They rarely get challenged by public submissions, since there are rarely dedicated residents or businesses nearby who can make professional submissions, there are no meetings to attend, and the CBD is an everything-goes zone anyway, so no possibility of VCAT. In fact the Department has been surprised on occasion when I said I wanted to make a submission!

So it has merrily gone on its own way, ignoring all the Urban Design Guidelines about podiums, tower spacing and plot ratio. The CBD is in the process of being dotted with towers with no or minimal podiums, some very close to other towers (or each other) that themselves were built too close to side boundaries, many in the 10m wide ‘little’ streets, or even smaller lanes, some even facing each other, and a big cluster between the Vic Market and RMIT, and of course Southbank. These little sections of our city are indeed going to look Hong Kong-ish pretty soon, though a bit zippier. But these no-or-practically no setback towers are now creeping into the city proper, like the giant 35 Spring Street, and Tower Melbourne. Collins Street will be next, and there goes years of careful planning that has retained a low scale streetscape, with setback towers in the most part. In the future, only the height limited heritage-listed precincts of the city will still feel like ‘Melbourne’, assuming those controls aren’t dumped as well …….

There are worse places to become like…at least Hong Kong has character! Though I do of course see your point