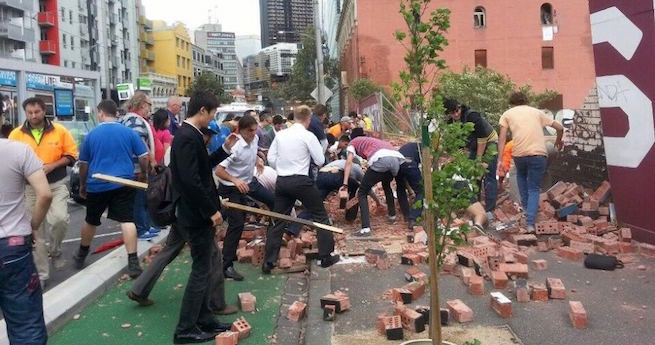 A few people have asked recently what ever came of the investigations into the wall collapse. For those not familiar, a long section of brick wall fell to the footpath at the C.U.B. site in Swanston Street one windy day late in March 2013. Of the many people ambling along this busy Melbourne street, three young students were killed. Many investigations were launched by organisations including the Coroner’s Court, the police and Worksafe. I last reported on the Magistrate’s Court hearings in 2015, and had been wondering myself what has happened since.

I had been expecting the coronial inquiry to eventually kick off, which it was going to do at the close of the court cases. There were only a couple of direction hearings in December 2013, where the site owner’s lawyers were rumoured to be numerous and obstructive at every turn. The hearings paused when the case went to the Magistrate’s Court in 2014.

After Grocon (Victoria Street) Pty Ltd plea-bargained their way down to one charge, then paid their 250K fine into the consolidated fund. Afterwards they began selling off the undeveloped parts of the site at a very handsome profit.

In 2016 Grocon launched a new website, pulling news across from the old site. All news right back to their posts about the wall, which are now only to be seen at the Internet Archive.

Aussie Signs, founded in 1982, cancelled its GST registration on December 31st 2015. In February 2016 it was fined $250,000 for its role in the wall collapse. Aussie Signs pulled its website*/AussieSigns.com the following month, and went into liquidation in May. Phonecalls were redirected to Billboard Media, a business at the same address in Sandringham. Billboard Media was launched by Aussie Signs as a separate division in 2012, specialising in adshels and large format billboards. 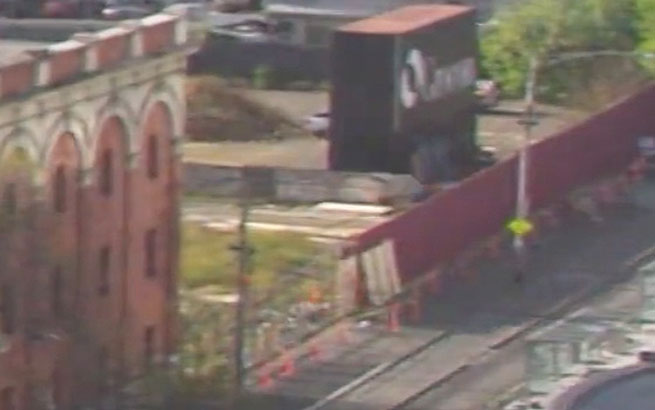 The sub-sub-sub contractor who actually erected the hoarding was reprimanded for not checking that the work his small company Paramount Signs was sub-sub-sub-contracted to perform had a building permit. No one else appears to have checked either, but this was the man who in 2015 was fined $7,500 plus 26K court costs, striking fear in the heart of all tradies. Maddocks published an analysis of the trial a few months later.

“The Court accepted that although Mr Westmoreland took no deliberate action to avoid his responsibilities, in saying he relied on others to obtain the appropriate permits, he was found to be guilty as charged, for he had not given specific consideration to the need for a building permit. Magistrate Gwynn highlighted that checking for the existence of a building permit could have easily been achieved through use of the Council registry or through compliance with regulation 317, which sets out that the building permit must be available for inspection at the allotment concerned whilst the permitted work is in progress.” [ Maddocks 18.08.15 ]

I’m not sure where a copy of a permit could have been kept, given that this was a wall at the edge of a vacant lot. The permit registers have only been available to download from the council website since 2016 – on the website that existed in 2011, when the hoarding was built, there was no method provided to search for or inquire after a building permit’s status or existence. The register spreadsheet for 2011, available (but misfiled) on the current website, lists permits for just one sign and one hoarding across the whole city. Though the registers can now be found, they are hardly easy to search. It’s startling that this vital information has not been imported into a searchable online database with mapping tools.

Of all the “sign erectors” currently listed on the Victorian Building Authority’s register, Paramount’s owner is the only one required to “provide quarterly reports listing jobs undertaken with permit details.” Paramount is still trading, and up front and centre on its website is the following statement:

“Our mission is to set the standard for safety and quality workmanship for the signage installation industry and to be an advocate for ensuring all regulations and standards are met. This is why: We Don’t Take Chances.”

I’m not sure what the police are up to. I sent an email to a contact from early on but got no response. Then there’s Worksafe, which was one of many agencies trumpetting their investigations in 2013. In 2016, after the Aussie Signs trial, a brief summary of this investigation was added to an online database.

“The accused pleaded guilty to the charge on the basis of its involvement in the attachment of the timber hoarding to the wall which increased the risk of the wall collapsing. The company was convicted and fined $250,000. The offender pleaded guilty and was with conviction sentenced to pay a fine of $250,000.” [WorkSafe Prosecution results summaries database]

There’s not been much of a peep out of the council or the state government since the collapse, which leaves me back with the Coroner’s Court. Since 2013, key figures have departed. The State Coroner working on the case resigned and was replaced late in 2015 by Judge Sara Hinchey. Grocon’s QC at the early hearings, Ross Ray, died in a quad bike accident in 2015.

There is no mention of the status of the investigation on the Coroner’s website so I pinged them an email recently. Here’s the response.

“This investigation is still ongoing so there will be no information on the website at this time. The file is currently with the State Coroner, however we am unable to provide you with a time of when a finding may be handed down i am sorry.”

The use of the word “investigation” in this coronial context could mean that an inquiry is yet to start and may not start. According to the Coroner’s Courts documentation, an “investigation” can lead to a “finding without inquest”.

In January 2015, the Victorian State Coroner introduced time standards to ensure that findings were delivered in a timely manner. Unfortunately it doesn’t apply to deaths before that date. Payne’s Lawyers mention the case as an example of one that’s taking its time.

While many coronial proceedings are resolved promptly, some matters can run for many years, with parties periodically being required to attend court or submit documents. “We currently act for a party in the Coroners Court’s investigations arising from the Swanston Street wall collapse. Proceedings commenced in 2013 and are ongoing.” [March 2018, company blog]

So we wait. Five years, seven years, ten years, we will wait. In the mean time, be wary of gargantuan billboards and old walls. In the absence of official recommendations that might reduce the likelihood of a similar event occurring, why should we think anything has improved?

Another post will soon cover what’s been happening at the building site that the wall once shielded.