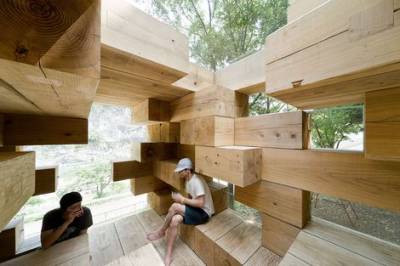 Wow, free internet. I’ve lost my bearings wandering about a huge room at the WAF filled with A2 panels describing many of the hundreds of entries to the awards. The good folk here have just launched a web site which shows the full 722 entrants online, at worldbuildingdirectory.com . The winner will be announced in an hour or so, from the two shortlists, here and here

There’s a blandness about these convention centres that just wears you out. They are a lot like airports: massive square spaces, guards everywhere, detached from their surrounds, miles from town. Just no planes or duty free. Not exactly condusive to thought. The sea is close but I haven’t found a way to get there yet.

First impressions of the World Architecture Festival? Fascinating, risky, and very English. Maybe because the Brits organised it and it is immediately followed by the RIBA conference? The language has been a problem as so much relies on the architects´verbal presentations to the english-speaking juries. Maybe we can go Spanish next time… and I think there will definitely be a next time.

The pic is Final Wooden House , Japan by Sou Fujimoto Architects , fashioned just like a japanese wood puzzle I used to have that never got solved.

And the winner was… Grafton Architects (Ireland) for their Universita Luigi Bocconi in Milan.
LINK