Another month, another wounded architect. This time, it isn’t due to the recession resentments of Spanish leftists, it’s conservative Washingtonians who want a monument to Dwight Eisenhower that’s lot more conventional than the one proposed by Frank Gehry. They don’t seem to like any of the “isms” of the past century or so. We find out who wins this coming Friday.

The site is a difficult one on Washington’s Independence Avenue. It is one lost between buildings and bisecting roads. The brief is difficult too, and becoming more so. The architect is an old pro from Santa Monica who in 1979 wrapped his house in hurricane mesh, keeping with neighbourhood character. Washingtonians don’t seem to like this history of cheekiness, or ‘irony’, and suspected the worst when he wrapped the entire site in a transparent decorative mesh.

This time it isn’t hurricane mesh, it is more considered. The screen defines the ‘park’ and was a tableau of images lifted from events in Ike’s life. After development this was switched to display trees around Ike’s childhood home in Abilene, Kansas. It solves all the problems with the site in one fell swoop. But the screens continued to present problems – why focus on his childhood and neglect his future feats as general and president? Why use a screen that to the family looked like a concentration camp (Gehry, being Jewish, didn’t take this at all well), and to others it reeked of Gehry’s ‘nihilistic’ architectural attitude. 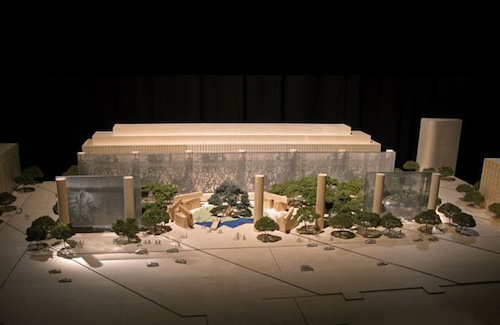 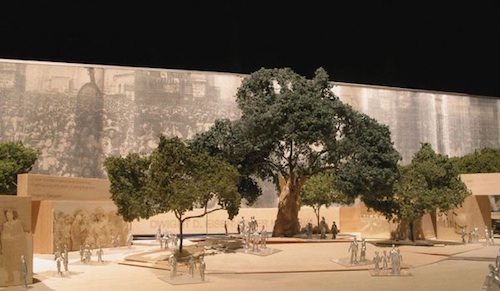 83 year old Frank (O.) Gehry’s career has been a fascinating one to watch. Starting out in Canada, then working on humdrum housing in L.A., then a major shift into the screened fortresses of the early ’80s, then another into colourful sculpted forms under the influence of contemporary Claes Oldenburg. In the late Nineties he finally reached the big time with the titanium-shelled Guggenheim in Bilbao, credited with changing that town’s fortunes and, for better or worse, triggering the ‘Bilbao Effect’, felt as far away as Geelong.

The reputation he’s built up for sculpted singular forms, reinforced by Sidney Lumet’s recent movie, masks his skills in shaping external space. To see that, it is necessary to wander about his Loyola Law School on Olympic Boulevard, or his best work in my book, a modest shopping complex near Venice Beach.

But that west coast heritage doesn’t count for much in Washington. A site dedicated to killing off the scheme tries every angle available. From questioning the chosen sculptor’s previous nude work, to detecting a change in national mood, to conveniently supporting the call for an open competition (the original was limited). But the stick is pointed mainly at the architect. The site includes a lengthy page of sound-bites from Gehry, dating back to the 1970s, that are meant to explain to us why he is not of the right moral character to work on this project. But it isn’t just Gehry, it’s his ilk. The National Civic Art Society, which published the website, sees itself as fighting on behalf of traditional counter-culturalists against… “a postmodern, elitist culture that has reduced its works of “art” to a dependence on rarified discourse incomprehensible to ordinary people.” The Washington Post thinks they go even further, mounting a “philosophical attack on the legacy of modernism, post-modernism and anything that smacks of avant-garde art, going all the way back to architects such as Louis Sullivan and Le Corbusier.” 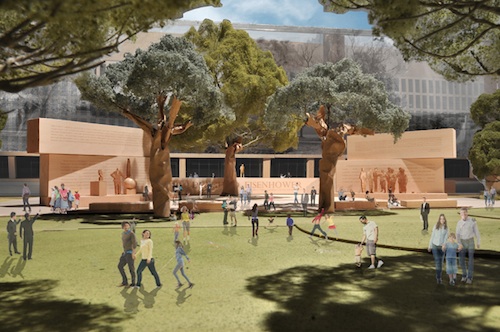 The Eisenhower memorial is being redesigned by a publicly patient Gehry, politely responding to a queue of concerns and protests voiced by committees and descendants. Most recently he has introduced more sculptures of Eisenhower at different stages in his career, and changed the ‘barefoot boy’ sculpture to a young cadet, but has retained the steel backdrop screens. These, the core of his idea along with the barefoot boy, are again under attack. I think he is entitled at some point soon, to blow his own stack. Then the NCAS may get its way, which appears from their recent competition to be something classical and traditional, dwarfed by the surrounding buildings, and sidelined by busy traffic… 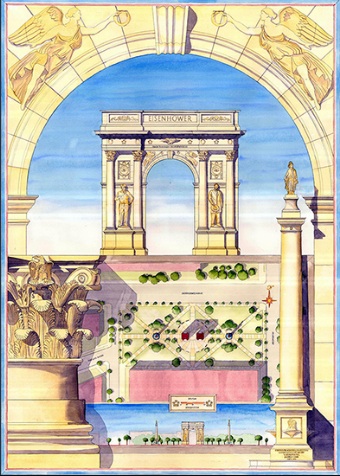 Maybe if Gehry had looked at the similar sagas of just about all of Washington’s presidential monuments, he would have kept well away. The Washington monument took 53 years to build, thanks to the pesky interventions of the “Know-Nothings”. The final result, absent the original colonnade, was against architect Robert Mills’ wishes, he thought it would look like a “stalk of asparagus”. Not far off..

[ Much of this information is drawn from an in-depth article by Philip Kennicott in the Washington Post, which can be viewed here, though you’ll need to register (for free) to read it all. ]

yes washington seems to have a coterie of believers in classicism – remember the sculpture added to the fantastic Vietnam memorial ? and have you seen the WWII memorial ? Looks like Lutyens designed it, but dates from 2004. Noice.

The only thing I dont like about Gehry’s design is that having a square at all cuts off another chunk of one of L’Enfent’s diagonal roads. Though there’s not much of Maryland Avenue, it does point straight at the done of the Capitol, providing a view-line that would also be gone. So that’s me being a traditionalist !