Martin Filler, at the New York Review of Books, wades through 8 new books on Le Corbusier, and gives some hint of his inner complexities. He also describes Le Corbusier as a lecturer (Tim Benton has just written a book about this):

“Despite Le Corbusier’s interest in theory, his discourses were anything but cerebral abstractions, and conveyed a vigorous physicality thanks to the method through which he illustrated his thoughts. His visual aids were low-tech yet high-impact. On the wall behind him, the architect would unroll and pin up a swath of yellow tracing paper as wide as a movie screen. While he spoke, he used varicolored chalks or crayons and sketched a profusion of pictograms, scrawled a welter of catchphrases, and ended up with a dense calligraphic mural like a Cy Twombly drawing avant la lettre. Many such Corbusier lecture backdrops survive, intact or in tatters, thanks to souvenir hunters who swooped in and claimed them the second he exited the stage.” 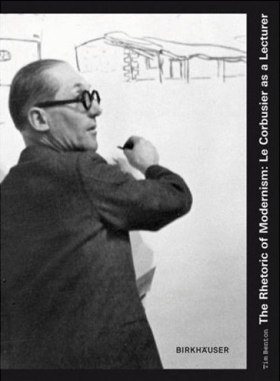