Tonight’s talk on Barangaroo, with Paul Keating and Richard Rogers: filtered live via twitter . A sample from John Demanicor: “they’re wearing us down with “soundbites” “place for people” “human scale” .. yawn hype yawn.”

A study released today compares 1990s predictions of massive timesavings if new freeways were built in Melbourne, with current data taking into account all the new freeways. The report concludes that car travel times in Melbourne are slower than ever. New roads mean new traffic. 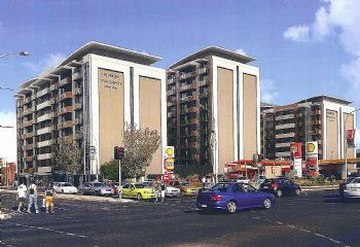 At the Planning Institute of Victoria forum on Wednesday, Professor Rob Adams announced some startling findings, from a report commissioned by the DPCD. 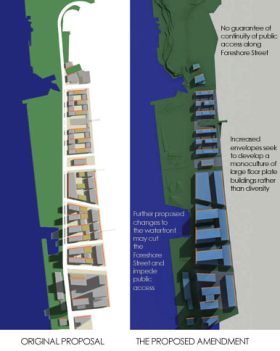 Things are not going well for the architects (Philip Thalis, Paul Berkemeier and Jane Irwin) who won the East Darling Harbour / Barangaroo competition 3 years ago, beating a hundred and something other entries . They complain of being sidelined as the government has sought to increase office space on the site by a third (it has already been increased once), and allow a single developer to take control. Philip Thalis:

A panel of holidaying experts ponder what the blinkers to do with Sydney. Jan Gehl’s pricey 10 months-in-the-making report seems to have left locals a little down. They don’t seem to hate The Toaster as much as they used to, but they’d really like to blast the Cahill Expressway out of Circular Quay. DJ Adam Spencer would like to see Pitt St and King St become cycling streets, “the cars would just deal with it. Initial complaints from business would be allayed when they realised that trade boomed.” Hmm I think they tried that with Swanston “Walk” in Melbourne, not a great success. They also think the public transport’s crap and that cars are killing the city.

The cars that ate the city