They really want to hang out in the past down at the Parks Branch. They’re about to bowl anything in Fitzroy Gardens that looks like it was built after 1939, after a spot of public consultation. They’ve lept on Heritage Victoria’s advice that the only decent things in the garden were built in the nineteenth century, at the turn of that century, and in the Inter-war period, which Parks mistakenly think ended in 1945. They appear to have taken their obligation to look after items from these periods as a license to obliterate anything else.

OK. This little website is still a bit touchy over a spot of vandalism four years back. It might show.

Some things have improved though – at least they’re telling us what they’re going to do beforehand.

In there headlong rush into the past, they’re intending to demolish most of the maintenance depot (‘cept the heritage buildings), that little ticket office outside Cooks’ Cottage, and..

The 1982 Joan Arnold sculpture is, “in very poor condition”, and people are nicking off with the little sea creatures. They also complain that it squirts people and wets the concrete and that there is a risk of injury. No! 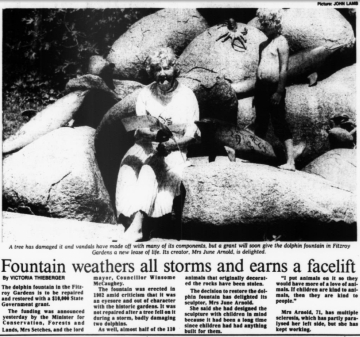 Zooming back to 1989, it’s like.. déjà vu. Back then people were complaining that people were nicking off with the sea creatures, and that the fountain didn’t fit the gardens. Council was a different beast back then and approved a grant to restore the sculpture. The Age reported that the 71 year old Joan Arnold was delighted, saying she’d built the sculpture with children in mind – it was a long time since they’d had anything built for them. 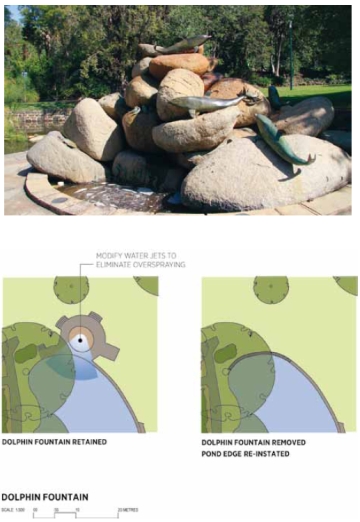 Zoom way back to 1981, and The Age’s welcoming editorial : “In the graceful, historic Fitzroy Gardens, it will stand out as the sweet – but utterly inappropriate – work that it is.” They go on to right it off properly by calling it a “diversion for children”.

Take your kids to see it, now. Perrott Lyon Mathieson helped out building it, by the way.

Not an offensive building – and not very old. They are careful not to criticise the existing building’s modernist ’60s pavilion design, but kind of let the cat out of the bag with one of their options..

“A second option is for a café rebuilt on the same site with the capacity to provide the same level of services and functions as the present facility.”

Umm… so why would they want to demolish it? It mightn’t have anything to do with the cute little photo of the cafe demolished in 1963, dropped into the pages nearby? Replica Victoriana here we come.

Not getting demolished.. Quite the opposite!

A cabman’s shelter from “the turn of the 20th century” is getting wheeled out into the daylight. No associations with the gardens, other than having been stored in a shed there for a while. That’s apparently good enough.

Grey Street fountain, this Victorian piece with a pile of rubble at the base is to be retained and conserved. The Parks Branch tried pulling it out in 1968, and they got what for from the public.

Fitzroy Gardens may be about to get a maze, like any self-respecting British garden would. It would seem that this disobeys the policy of removing buildings from the garden that was used to demolish the gents monopod in 2006, rather than otherwise utilising them. But never mind, that was obviously just a temporary policy. The Parks Branch’s serving suggestion for the children’s maze: 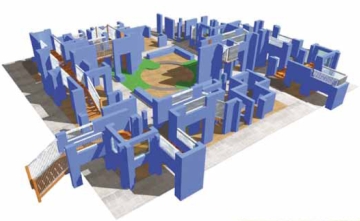 The public is encouraged to comment before May 21st, 2010. In line with their heritage policy, Parks will only accept comments from members of the public who were alive during the inter-war period, or preferably before.