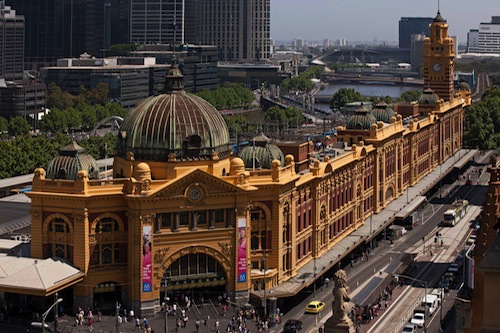 Note: The brief is not yet released. Follow this page for updates. Scroll down for competition guidelines.

“We are looking for the world’s best ideas to restore and reinvigorate the Flinders Street Station precinct, including the station concourse, platforms and historic administration building and through to the Banana Alley Vaults and Queensbridge,” Mr Baillieu said.

“This precinct calls for creative brilliance from across the globe so a Melbourne landmark site can be restored to its full potential. This competition will harness the very best ideas and help bring the precinct back to life.

“After years of neglect, the administration building has been left derelict while access and facilities are well below an acceptable standard.

“While the Coalition Government acknowledges that delivering a project of this scale and ambition will be costly and complex, this competition will give Victorians a winning design to guide future development.”

The Coalition Government is seeking ideas and designs that address the whole 4.7 hectare site – the administration building, the platform area and the railyards to the west – which improve the precinct as well as conditions for commuters.

“This station and its surrounds should be better integrated with adjacent areas including Federation Square, Flinders Street and the north bank of the Yarra River,” Mr Baillieu said.

“We see a rejuvenated Flinders Street Station as a partner to Federation Square, forming a new gateway public space for Melbourne and embracing potential major improvements to the Yarra’s northern bank and the CBD-river pedestrian routes.

“We also acknowledge the enormous challenges attached to this project, including the conservation of the station façade and heritage values and delivering this project while Flinders Street continues to operate and expand as Melbourne’s busiest railway station.”

Mr Baillieu also announced the panel which would decide on the competition winner. The panel will include:

“The examples of Federation Square and the Melbourne Museum show how successful competitions can be in delivering world-class design,” Dr Napthine said.

“Competitions attract the attention of the world’s best designers and help bring the public into the process.

“The $1 million prize pool will help attract the very best architects and designers from here and abroad, and I expect some of the strongest ideas will come from Victorian architects who know and truly understand this magnificent but tired precinct.”

Flinders Street Station was completed in 1910. The administration building is four storeys high, more than 250 metres long and 10 metres wide. It is partly occupied by Metro Trains Melbourne (MTM) with the remaining sections of the building largely unoccupied since the 1970s.

After years of neglect the building is deteriorating. Some parts are derelict while substantial areas do not meet building code requirements and are not suitable for occupation.

The design competition will be conducted in accordance with the Australian Institute of Architects (AIA) guidelines. The AIA has been consulted and endorses the competition.

The competition will run in two stages: design concepts will be called for in mid-2012 followed by a review and short listing period. Short-listed entrants will then submit detailed proposals in 2013.

Stage 1 of the competition will open in mid-2012 following the preparation of a detailed project brief.

Short-listed entrants will receive a honorarium to assist with costs associated with participation in the second stage of the competition.

The objectives of the competition are to: