Who would have thought that less than two decades after the 1910 completion of Flinders Street station, there would have been calls to start again. That was in 1925, and the reason was congestion. The next attempt was in 1949, when James Alexander Smith proposed to rebuild it and roof over the railway yards. Again, that proposal didn’t take hold. In 1958 theatre architect Neville Hollinshed had a go. He was responsible for the Comedy, the Metro, Horsham Town Hall, and many other buildings. He wanted to see a new station, civic square, and public buildings there. 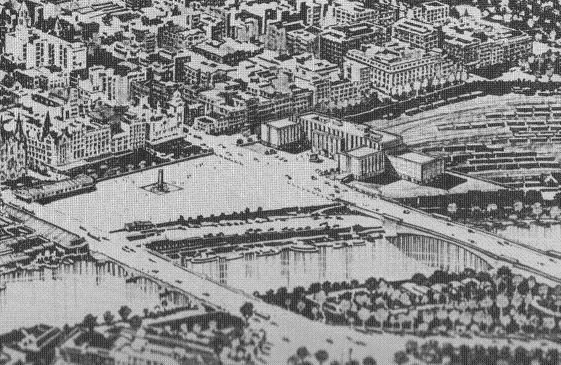 Woolbroker William Lempiere followed in 1961, and then a couple of years later came a plan that almost made it into being. As The Age described it in 1975 , 60 year old Keith Herbert Jones…

went to see the then Minister for Transport, Sir Arthur Warner, but was told by Sir Arthur to wait outside his office for a minute because he was expecting some idiot who wanted to talk about roofing in the Flinders Street yards.

“I said I was the idiot, but I wanted to roof in the whole station,” said Mr. Jones.

Jones created the scheme over many beers at the RACV club with an [unknown] architect friend. They, “sketched their ideas with their fingers in spilt beer on the bar.” How Australian is that? 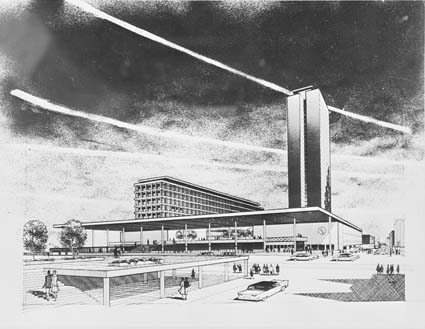 The scheme roofed over the yards between Flinders and Queen Streets, demolished the existing station, and provided a new concourse along Swanston Street. a 60 storey skyscraper would grace the new development, surrounded by a shopping plaza podium. Other buildings and hotels would be scattered through the development, and a, “scenic drive on the bank of the Yarra [would extend] form Batman Avenue to Queen Street.”

A few years later in 1969, with the scheme now in the hands of Lend Lease, Local Government Minister Hamer gave the go ahead. After millions had been spent on planning, Transport Minister Meagher told The Age in 1975 that this one wouldn’t fail, as it had funding and parliamentary authority.

But the atmosphere was changing. The ALP, architects, the Anglican Church, the National Trust and retailers were raising concerns. The 1970s brought with it a new awareness about ‘heritage’, and the old buildings were no longer just seen as hindrances to progress.

After a long break, and some underwhelming renovations to the Swanston Street concourse in the 1980s and 90s, congestion was once again enough of a worry to look at a major rebuild. This time round it would have to be self-funded by private development over the tracks.

There is little controversy about the need to develop, as it is getting horribly busy down there, and the Flinders Street facade and dome will be retained. Skirmishes instead erupted over the cloaked way the competition was proceeding. In response to a breakaway initiative by Melbourne architects to hold an exhibition of Stage One entries, Major Projects Victoria issued a veiled threat to shortlisted winners, hinting that exhibiting may result in disqualification. That didn’t go down terribly well in the media, even being reported in ArchDaily.

Possibly addressing this lack of transparency, the latest press release from Major Projects Victoria, dated 23rd April, makes a great deal of the upcoming People’s Choice Awards. People may not have much time to make a choice though if MPV hold to their original programme, exhibiting the developed shortlisted entries on the internet for a short time this July.

“This level of public engagement is the first of its kind. To have a People’s Choice vote in an architectural competition is only fitting giving the importance of Flinders Street Station… We want everyone to have their say on the future of the station precinct.” David Hodgett

They don’t forget to mention that, thanks to Australian Institute of Architects competition guidelines, the jury can’t take any notice of the People’s Choice Award, though they may look at the comments later, “to inform future plans”.

Posted by Peter on 28.05.13 in competitions and heritage