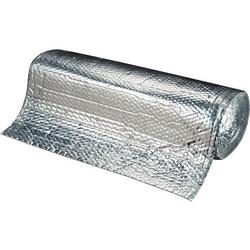 Environment minister Peter Garrett is under fire tonight for not banning foil insulation from the $2.45B insulation rebate scheme. After the deaths of four young installers ( 1 2 3 4) became publicised, he did. It is still quite legal to specify foil-backed insulation and foil multicell, but the trouble has been the many unskilled installers who raced into the artificially-heated market – some failing to take the necessary precautions when fixing the foil to ceiling joists – ie check for electrical wiring and use non-conducting tools.

The opposition’s angle is that he should have seen this coming – an explosion in demand, and a lack of skilled tradesmen to satisfy it. And he was warned of the problems, but Garrett says he placed his faith in a Minter Ellison risk analysis, which he promised this evening to make public.

Comparing the government consumer advisories on home insulation in Australia and NZ, you could easily miss the problem reading the Oz version here . It only says you should keep insulation away from recessed downlights. In New Zealand, where foil was traditionally used underfloor, they go a lot further. Maybe because three people died fixing insulation in 2007.

Smarter Homes :
“WARNING: Installing underfloor foil insulation can be risky. Be careful not to pierce electrical cabling with staples. Existing foil insulation, if improperly installed, can be live. If you are unsure about anything, hire a professional installer or get an electrician to check things out.”

Energywise :
“EECA doesn’t recommend the use of underfloor foil and this product isn’t covered in EECA’s insulation retrofit programmes.This is because of the safety risks, challenging installation, dubious performance and possible lack of durability.”

Architects’ obligations under the heavy-handed Occupational Health and Safety Act (2004), Section 28, don’t extend to the design of the construction process or to single dwellings. An architect could perhaps become liable should someone die from electrocution in a house which has a “live” foil ceiling and if part of the dwelling contains a workplace. More likely, builders will become unwilling to put foil into old homes, unless it’s up North and don’t have much choice .

A more direct area of risk for architects is the measure-up. It is hard to do a renovation to an old house without at some point crawling about in the dusty ceiling space. If there is foil insulation, lead-sheathed wiring, or rubber wiring up there, back out and get an electrician to inspect. More safety tips can be found in this government PDF

In fact after reading the rest of that PDF (p 36 onwards) I am not sending anyone up into a ceiling space without turning the mains off first.

There remains the problem of how to inspect a roof that is more than two metres above the ground… but that’s another post.

========
Aircell have just released a Q’n‘A PDF in response to the ban on foil insulation from the HIP, which affects them. They state that their products are, “are acceptable for any application except for installation under the HIP scheme during the interim suspension period”.

lot of things will kill you in a roof space.
surprised to hear you don’t turn the power off before going up there anyway.
hairdresser learnt that one as a student. same goes for tight underfloor space.

Nope. Never learnt that and no one ever told me. Hopefully this post will inform a few other ignorami.

2 of the 4 deaths are from installing bulk insulation – not all down to electrocutions. also been a spate of roof fires from bulk insulation too close to light fittings. more to all this than meets the eye. foil accidents are from very quick jobs rolling out sheet foil from rolls across top of joists + stapling down unable to see where the staples are going. wonder there hasn’t been more deaths? not only dangerous but useless as insulation in that position. should be to underside of rafters to work and be of the multicell/layer variety. whole thing is a rip off all round.
sack Garrett – he is personally responsible for funding a dangerous rort.