A lack of zeal

Driving past Waiheke Island’s new library construction site last month, I raised a bushy eyebrow on seeing the hoarding announcing Mainzeal Group as main contractor. I hadn’t seen their name anywhere for a very long while. I had thought they had been laid waste to on Black Monday, 1987. But I am an infrequent visitor to Auckland, my old home town.

The other eyebrow was raised today, seeing Mainzeal Group has gone into receivership, finally. It was apparently the country’s 3rd largest builder, with many new builds in Auckland and repairs in Christchurch on the books. The company’s collapse came as quite a surprise to everyone except the board. So there will be an awful lot of collateral damage.. not only have subbies probably lost any money due to them, all their tools are locked into sites around the new Zealand.

Mainzeal emerged into my consciousness during the boom times in Auckland in the mid 1980s. It was a good time for architects, but an appalling time for anyone interested in the city beautiful. There was not much left of the pedestrian-friendly Victorian Auckland by the time I departed in 1995, it had all been laid waste to for cheaply built towers and at-grade Wilson’s car parks. I saw a few too many of my favourite buildings disappear, and this became on of the 16 reasons I left Auckland for Melbourne.

Mainzeal brought about a particular hatred in my teenaged self. I, and many others, thought Mainzeal were scum for illegally knocking down His Majesty’s theatre and arcade in Auckland in 1987. That arcade was something any city would kill for. I think they paid something like a $500 fine.

Robin Morrison’s beautiful photo of the lost arcade is linked to here as I can’t reproduce it. When questioned by police as to why builders were all over the site in the middle of the night, Mainzeal said they were removing some seats from the theatre. By morning the whole lot was razed, and for years after there was only an at-grade car park and pie cart to replace it.

A year later, the equally covert overnight demolition of Brown’s Mill was carried out without even bothering to turn off the power and water, or removing artworks stored in the building. I was so annoyed that I cut the article from the paper, and very weirdly happened to have it sitting on my table today, 25 years later… 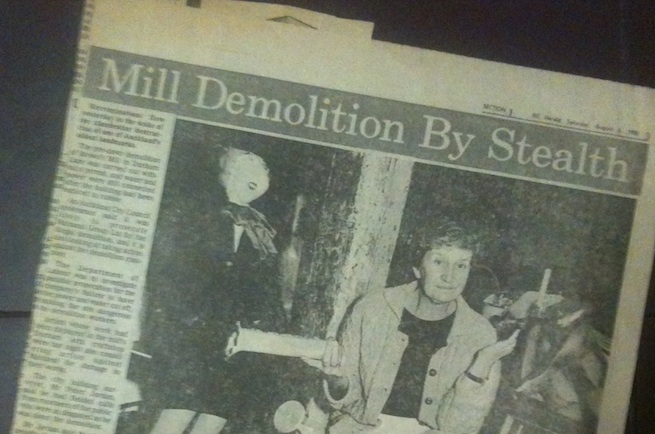 Yay! I thought I was the only one be celebrating MainZeal’s demise due to their appalling behaviour in the 80s. They deserve only part of the blame though; they were acting under instruction of the building’s owners and no doubt another company would have taken the contract if Mainzeal had demonstrated integrity and/or a spine. In part it still rankles because decades later the site on Elliot St is still just an ugly hole in the ground instead of a gracious row of 100 yr old merchant buildings. That does not mean I don’t feel for the sub-contractors. I do. It tells me the core values at Mainzeal didn’t change much over the last 25 odd years.