And the winner is… Denton Corker Marshall.

From a shortlist of big boys and girls:

Anyway, here is the competition website (there isn’t much there): UTS BROADWAY

No pics, DCM did not contribute to the fine public service that is the Supercolossal UTS gallery .
Nor did any of the short-listed practices.

So as this is an increasingly visual medium, here is a pic of the site, pre-DCM. 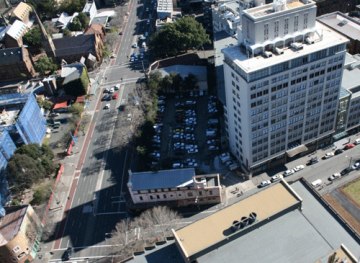 Presumably taken from the neighbouring UTS tower, a brutalist number by Michael Dysart . 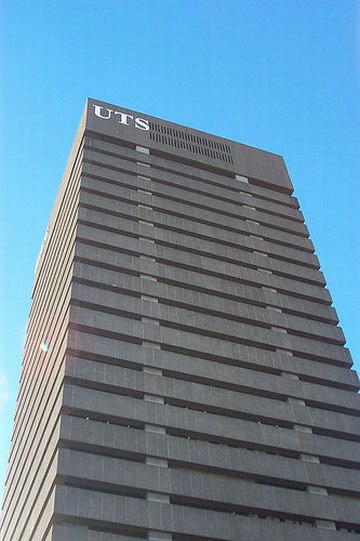 And here is a pic from the gallery of one of the not-shortlisted entries, by Terroir. 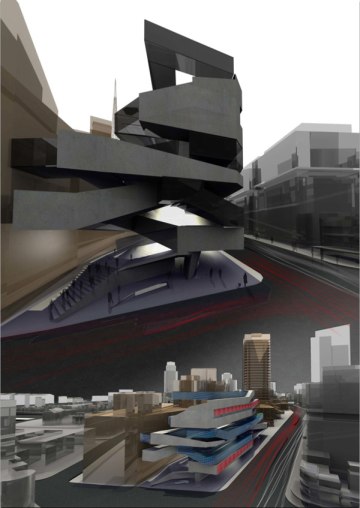 The short list consists of suspiciously… large looking firms. Which makes one wonder why anyone of smaller means need have entered. The competition brief notes that capability statements were to be assessed by a subpanel, independently of the designs. Does this mean the firms disqualified for not being behemoths were not even considered by the design jury? Apparently not – the brief says: “It is expected that some finalists will be selected on the basis of design concept, and some on the basis of capability.” But they do then say that the capability subpanel will “assess the ability” of all finalists without looking at them – so who knows what went on. Elizabeth Farrelly noted in April that the short list, “carefully excludes anything strange or provocative.”

Smaller practices (mine included) are becoming wary (and weary) of entering Australian competitions like this, they are a lot of sleep lost for no good reason. Matt Chan (Scale Architecture ), said on Terroir’s Google Group that,

“We didn’t enter as we feared the outcome would be as such. The thought was to direct our resources to a different competition where we would have a semblance of a chance of being be recognized. If we were to have entered, I also struggled to think of a capability partner who was not already doing the competition, who would not go on to claim full credit + who would see small fry such as myself adding to their band of experienced design directors.”

Perhaps the University of Melbourne, who did away with an open competition for their new architecture school, were actually doing us smaller fledgling practices a good deed – by not wasting our time – though it didn’t seem like it at the time. Will the boomers will have it all locked up for some time to come?

VIA AusDesignReview on Twitter
FIX Sorry to Matt for getting both his company name and URL wrong.

Posted by Peter on 01.08.09 in architects and competitions

University processes are glacial, but from Monday 17th August the UTS Broadway website will include all the shortlisted entries.
The DCM project was shortlisted for the second stage by the jury responsible for assessing the (anonymous) concept entries. I’ve not been privy to the concept entries, but am hoping that the discussion may move on from a “big-boring” versus “small-young-fab” dichotomy to one that addresses the architectural merits of the various proposals once we all get to see them and have a better basis for judging the judges.